At this year’s Game Developers Conference, held last week in San Francisco, attendees flocked to the CODE-CWA booth to learn how to organize for change at their workplaces and to play “Super Anti-Union Campaign Simulator,” a pro-union arcade game developed by CWA members at the Meow Wolf Collective.

During the conference, 30 workers gathered for a day-long organizing workshop to build skills and share strategies on how to win union representation. An article in the Washington Post listed “labor issues” as one of the five big takeaways from the conference, highlighting the CODE-CWA booth.

On Thursday, quality assurance testers at Activision’s Raven Software studio, who are organizing with CWA, sent a letter to Microsoft CEO Satya Nadella asking him to tell Activision executives to stop their union busting campaign and to encourage them to voluntarily recognize the union. The workers also ran an ad in the Seattle Times to share their concerns. Seattle-based Microsoft has announced plans to acquire Activision.

Earlier in the week, a video released by More Perfect Union highlighted the harsh working conditions faced by the Raven Software workers and their campaign to join CWA. “We had gone to leadership several times prior to us unionizing, prior to any of this, asking, hey, you know, here are the changes we'd like to see, how can we open up a dialogue,” Raven quality assurance tester Molly Weaver says in the video. “They weren't willing to put us at the table. So we are making our own seat at the table. That's what the union is, making our own seat at the table.”

At the Game Developers Conference, CODE-CWA members debuted their pro-union video game and helped attendees learn how to organize for change at their workplaces. 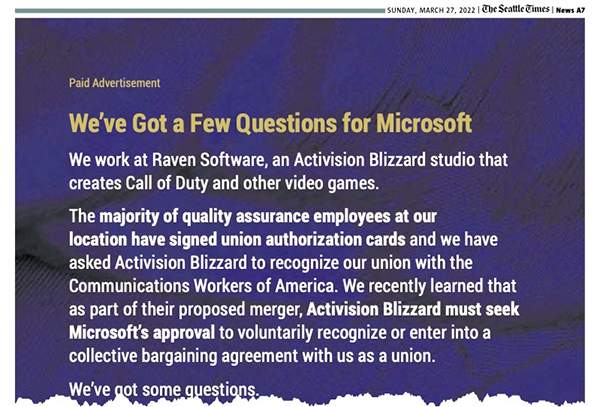 Raven Software workers who are organizing with CWA ran an ad in the Seattle Times asking Microsoft to tell Activision executives to stop their union busting campaign and to encourage them to voluntarily recognize the union.