Contracts expired for 14,000 CWA members at AT&T Midwest and AT&T Legacy T on April 5. Workers currently remain on the job but are ready to strike if negotiations stall.

A key issue at the bargaining table is keeping good, family-supporting jobs with affordable benefits and a secure retirement in our communities. CWA released a new report this week examining AT&T's continued role in hollowing out the middle class by eliminating thousands of jobs, closing call centers, and moving jobs to low-wage and overseas contractors.

The report reveals the devastating impact of recent call center closures across the Midwest, including in Michigan, Ohio, Wisconsin, and Illinois. AT&T workers report that the company’s offshoring of U.S. jobs is not only harming workers, but it's also hurting the company’s quality of service.

"I put in 20 years at AT&T, and then got laid off along with 116 of my coworkers 10 days before Christmas," said Sheila Lewis, who worked at AT&T's Detroit call center until it closed this year. "The way the company did it isn't fair or respectful. It's also bad business, because the overseas contractors doing our work cost the company money because of their poor service and harm to the AT&T brand."

"AT&T got rewarded with tax breaks, but AT&T employees are getting hurt," said Tomeka Cooley-Pettus, a 13-year employee at a call center in Dayton, Ohio, where AT&T recently announced layoffs.

Read more about the AT&T report at USA TODAY here. 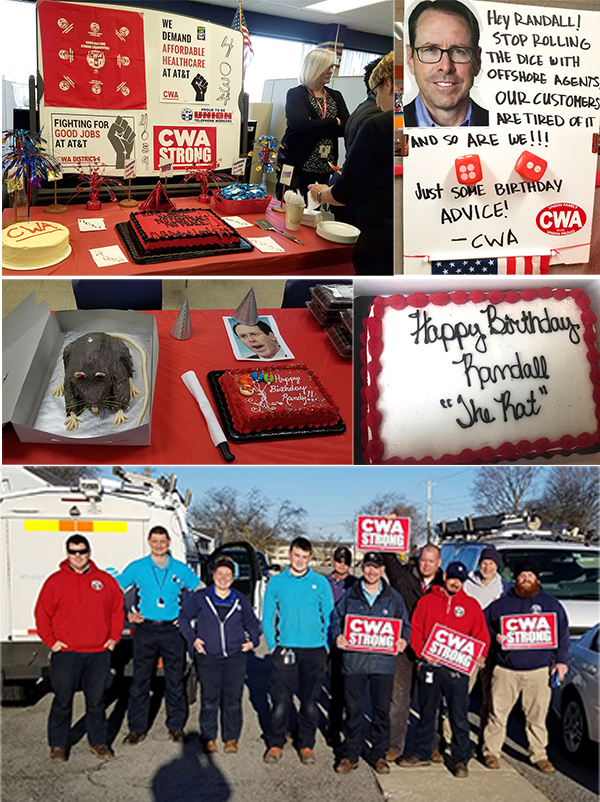 CWA members at AT&T Midwest including Locals 4034, 4324, 4621, and 4900, held actions to "celebrate" AT&T CEO Randall Stephenson's April 22 birthday by reminding him of the big promises he made in order to get the Republican corporate tax cut bill passed.