United Flight Attendants protested at the United Airlines annual shareholders meeting Wednesday morning at the Willis Tower in Chicago. The Flight Attendants, represented by AFA-CWA, called on United management to finish their merger with a contract they can ratify. You can watch video of the rally here.

"An airline is about people, and customer service starts with the people who deliver it and keep our passengers safe. United Flight Attendants will stand together to be recognized and call on United management to finish this merger with a contract we can ratify. Contract now," said AFA Presidents at United Airlines Kathleen Domondon (pre-merger Continental Micronesia), Ken Diaz (pre-merger United), and Randy Hatfield (pre-merger Continental). 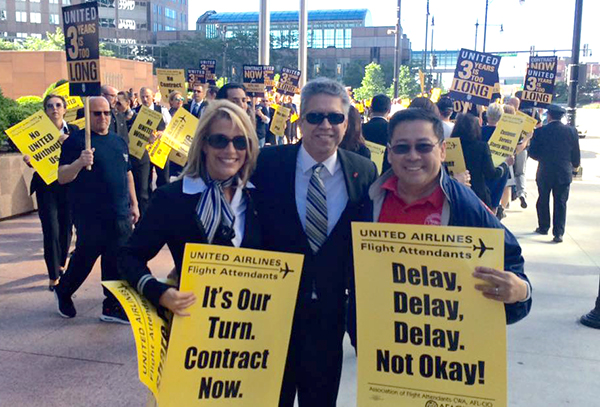 CWA's AT&T Mobility bargaining team reached a tentative agreement with the company for a four-year National Bargained Benefit Plan. Details of the agreement and ratification voting information will be provided on union town hall calls. 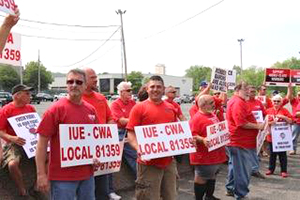 Members of IUE-CWA Local 81359 at Momentive held an informational picket in Waterford, NY, as their contract is set to expire this month.

Members of IUE-CWA Local 81359 at Momentive Performance Materials held an informational picket in Waterford, NY, as their contract is set to expire this month. Negotiations with the corporation that unilaterally slashed worker pay a few years ago are expected to be challenging.

"The biggest thing that everyone wants is affordable health care," IUE-CWA Local 81359 President Dom Patrignani said. "All we want to do is have a fair contract."

The International Alliance of Theatrical Stage Employees (IATSE) published a letter of solidarity with nearly 300 OFS workers, members of CWA Locals 3263 (Norcross, Ga.) and 1400 (Sturbridge, Mass.), who are fighting for a fair contract. The OFS facility in Norcross is also used as a movie studio.

The contract has been extended to June 29, and the CWA bargaining team continues to push hard for a fair contract.