Healthcare workers at Saint Barnabas Medical Center, members of New Jersey Nurses Union (CWA Local 1091), held an informational picket last week demanding a new contract that addresses major hurdles the workers face. One of their main concerns is the lack of adequate staffing, which affects the workers and the care patients receive. In addition to safe staffing levels, the workers are also fighting for fair wages and an equitable contract for all. Other union members, community allies, and elected officials attended the rally, showed their support for the workers, and called for safe staffing ratios. As they have been doing for the last several months, the workers are continuing to mobilize by wearing pins and buttons and holding solidarity actions to build power and strength for their bargaining committee.

Allan Block, Chairman and CEO of Pittsburgh Post-Gazette parent company Block Communications, was caught on camera last week showing how he really feels about workers at the paper. In a video which has been widely shared and received over 100,000 views on social media, Block swears at a NewsGuild-CWA mobilizer and hits him in the face with a bag of fast food. Later in the video, Block’s wife offers her opinion that if workers don’t like it that their health care was cut and they haven’t had raises in over 16 years​, they should just leave their​ jobs.

Workers remain strong on the picket line as they fight for good jobs, respect, and high quality local news coverage. 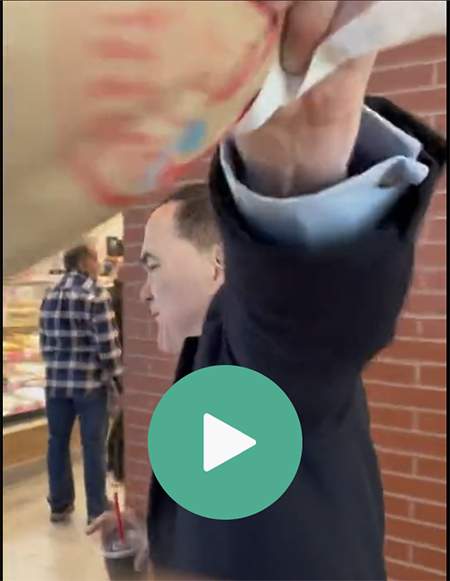 In this viral video, Allan Block, Chairman and CEO of Pittsburgh Post-Gazette parent company Block Communications, hits a NewsGuild-CWA mobilizer in the face with a bag of fast food.

Workers at the Fort Worth Star-Telegram, members of the Fort Worth NewsGuild (TNG-CWA Local 39213), went on an unfair labor practices strike because of the company’s continued refusal to bargain in good faith. The workers are the first media workers in Texas, and the first at a newspaper owned by McClatchy, to strike. The union filed an Unfair Labor Practice complaint against McClatchy in August. Throughout the bargaining process, McClatchy and its representatives have repeatedly presented existing company policy at the bargaining table and have refused to budge at all on big-ticket items, including wages, severance, and layoffs. McClatchy has made few attempts to negotiate fairly with the bargaining team or to offer serious consideration of the union’s proposals. The workers are receiving overwhelming support from their neighbors, friends, community members, fellow journalists, and labor leaders such as Texas AFL-CIO President Rick Levy, who joined the picket line. 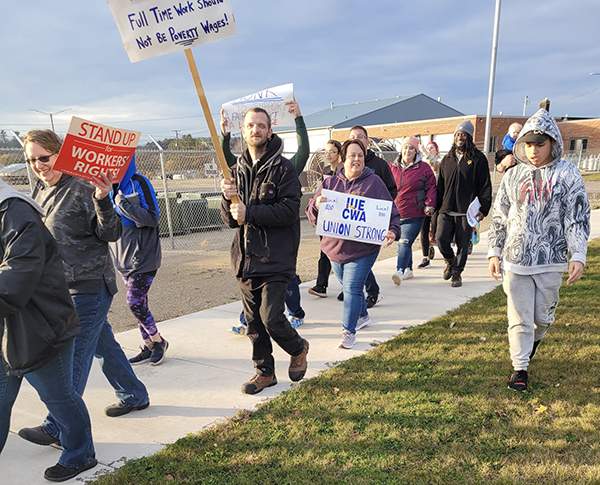 Workers at Northern Michigan Veneers (NMV), members of IUE-CWA Local 84800, are mobilizing to demand a fair contract. The workers, who are fighting for fair pay and safety in the workplace, held a day of action in Gladstone, Mich., last week joined by other union members and community supporters. They are engaging in weekly actions and mobilization efforts ahead of their contract expiration on December 3 to increase awareness about the greedy and shameful acts of NMV and the Besse Forest Products Group, who own the facility.