The contract includes industry-leading wages and safe staffing ratios. The new agreement makes major strides to address the staffing crisis, including adding 500 new positions, daily staffing incentive bonuses, and a minimum 12% wage increase over three years for all workers. Kaleida will also create two new union positions in order to oversee safe staffing ratios and ensure they are adhered to, and to facilitate the improvement of working conditions within its hospitals. This victory is the result of the workers’ resilience and mobilization throughout the eight months of bargaining, including rallies, pickets, online and worksite actions, as well as a strike authorization vote that was overwhelmingly passed by the membership. “This contract is a huge win for our members who have been struggling to care for patients amidst serious staffing issues and a nationwide worker shortage. We fought hard to ensure there were no compromises made, which is a testament to the tireless efforts of our members, whose top priority has always been their patients,” said Cori Gambini, President, CWA Local 1168 and a Registered Nurse.

Workers at Montefiore Nyack Hospital and members of CWA Local 1103 held an informational picket calling on the hospital to bargain in good faith for a fair contract. The workers’ previous contract expired on June 30, 2022. They have been negotiating a new contract covering 130 technical employees. “For over two years, our members sacrificed their own health and well-being to care for patients and members of the community during a worldwide pandemic. Every single day, they reported for duty and were here to help save lives, even when they were scared for their own lives. They reported for duty because they were committed to their careers, the hospital and to the health and safety of the community. It is time for Montefiore Nyack Hospital to treat their employees with the respect they deserve and come to this bargaining table and do just that,” said Kevin Sheil, President of CWA Local 1103. The workers were joined by other union members, health care workers, elected officials, and community allies. 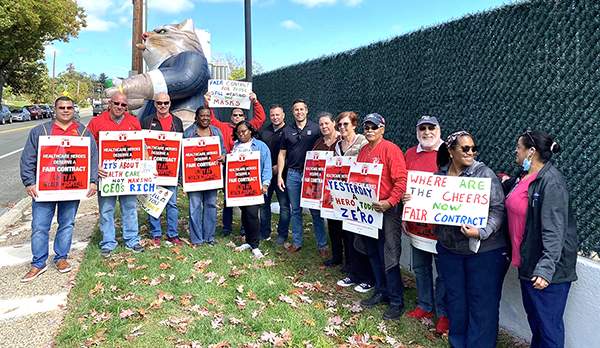 Workers at Montefiore Nyack Hospital and members of CWA Local 1103 held an informational picket calling on the hospital to bargain in good faith for a fair contract.