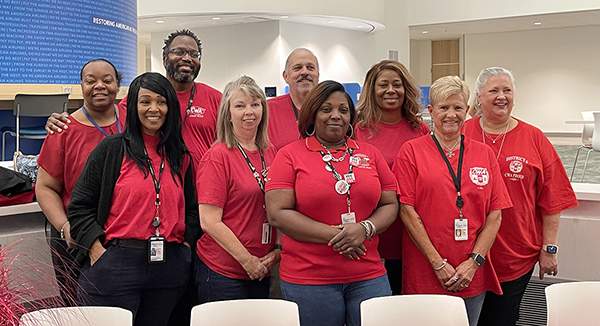 Passenger Service Agents at American Airlines, members of the CWA-IBT Association, kicked off bargaining this week in Dallas. Wages will be a key issue in negotiations because pay rates are well below industry standards. Members at stations across the country showed their support of their bargaining teams by posting their solidarity selfies on social media.

Workers at the Duquesne Club, members of CWA Local 13500, reached a tentative agreement for a new three-year contract that provides across the board wage increases for all employees. The contract also includes improvements to the employee 401(k) plans, implementation of a new club-funded short-term disability plan, partial carryover of vacation time, no changes in the health plan, and the Club’s commitment to absorb the full six percent health care premium increase that was scheduled for 2023.

Tech workers at data software company Catalist, who recently organized to become members of CWA Local 2336, have ratified their first contract becoming the first progressive data and analytics firm with a staff union and a contract. In a statement, the Catalist bargaining committee said, “We formed a union in order to guarantee that Catalist workers are empowered to participate in building a more equitable, inclusive Catalist. We have been heard at the negotiating table and, together with Catalist management, have drafted a contract that further enshrines the voice of the Catalist workforce.”