CWA members under the Orange contract at AT&T Mobility have won a groundbreaking tentative agreement that met or exceeded all of the goals they had set for the bargaining committee. The Orange contract covers retail workers, call center representatives, and technicians in 36 states in the Northeast, Midwest and West, and the District of Columbia.

Members mobilized around the need for wage increases to address rising costs and the effect of AT&T’s shifting of work from company-owned stores to third-party authorized retailers. The proposed contract contains substantial increases to base wages, title-specific upgrades, and unprecedented adjustments to protect against inflation. It also has a first-time requirement for at least 20% of AT&T stores to be company-owned.

“This is your victory,” the bargaining team wrote in an email announcing the agreement. “Our bargaining team could not have achieved this breakthrough tentative agreement without the hard work that you did mobilizing.”

Other improvements in the four-year contract include limits on mandatory overtime, privacy protections for call center representatives who are working from home, the addition of two weeks of paid parental leave, and new health care options.

“These workers provided essential services during the pandemic, putting themselves at risk to enable us to stay connected to one another,” said CWA President Chris Shelton. “They stayed united during contract negotiations and won an agreement that recognizes the importance of the work they do and shows what working people can achieve when they join together and demand respect.”

Click here to get all the details about what’s in the tentative agreement. 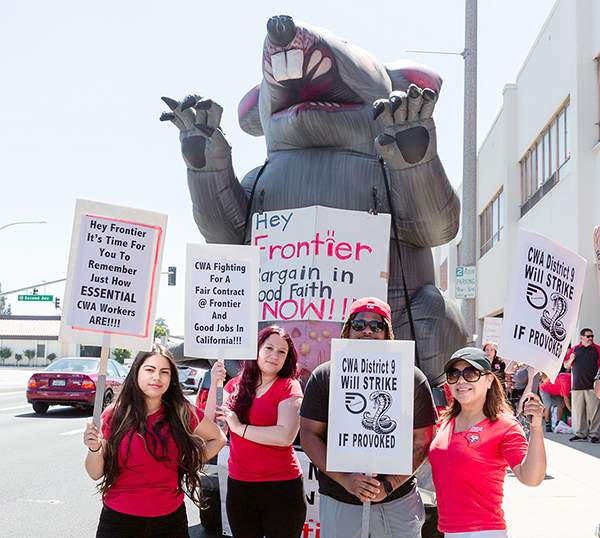 CWA members at Frontier Communications in California are ramping up their mobilization efforts to build their strength at the bargaining table as they continue to negotiate a fair contract with the company. On Sunday, members and supporters gathered in Covina, Calif., for a rally hosted by CWA Local 9586 to make their demands heard loud and clear.