Last week, CWA members at Frontier Communications in California participated in an unfair labor practice strike to protest the abusive actions of a Frontier Communications supervisor who retaliated against workers for union related activities, in violation of the National Labor Relations Act, as well as state and federal laws and the company’s code of ethics. After repeated incidents and multiple grievance filings, the members walked off the job in protest. As a result of the strike, the supervisor has been temporarily suspended.

The workers are continuing to bargain with Frontier for a fair contract. Despite entering into federal mediation, the company refused to make progress on several key issues including wages, job security, affordable healthcare, and issues related to working from home.

“In the coming weeks, CWA members at Frontier across the state must ramp up mobilization to make our demands loud and clear and win the contract they deserve,” said Frank Arce, CWA District 9 Vice President. “We must show the company that we will not back down until we get a contract that values the contributions we make to the success of the company and the telecom industry as a whole. I am confident that the members are ready to do what it takes to bring this contract over the finish line.” 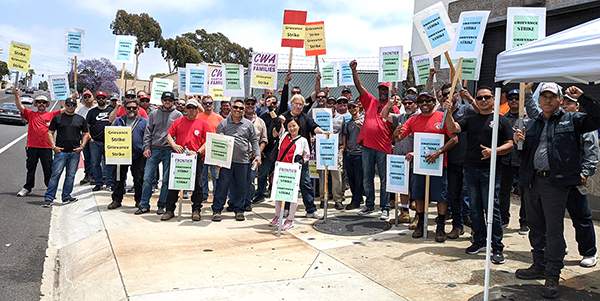 Members of CWA Local 1014 in Camden, N.J., reached tentative agreements on three contracts for the supervisory, non-supervisory, and crossing guard employees of the City of Camden. The agreements include across the board raises; a more affordable, quality healthcare option that significantly reduces employee contributions; strong health and safety protections for the city crossing guards; recognition of Juneteenth as a paid holiday; and more. The members celebrated this win at a press conference at City Hall last Thursday with Camden Mayor Vic Carstarphen. In addition, Mayor Carstarphen simultaneously announced the city will use funds from its federal COVID-19 bailout fund to provide “premium pay” to CWA Local 1014 members employed with the City.

Last Friday, CWA members at OFS Fitel, LLC, a company that manufactures telecommunications and fiber optic products, held an informational picket demanding a fair contract. Workers covered by the current contract at two OFS locations in Norcross, Ga. (CWA Local 3263), and Sturbridge, Mass. (CWA Local 1400), have been bargaining for a fair contract for weeks. However, the company refuses to raise the starting wage above $16 per hour for their highly skilled and dangerous work. In addition, the workers are seeking a contract that will address deteriorating warehouse conditions, grueling hours, low pay, and a high turnover rate.

“This bargaining is an opportunity for OFS to recognize the value of our members' contributions to the company and our broadband infrastructure. Instead, they have chosen to ignore the workers’ demands and continue to undermine their rights on the job,” said Lisa Bolton, Vice President of CWA’s Telecommunications and Technologies sector.

“These workers do grueling, highly skilled work that is essential to the broadband build-out taking place across the country,” said Richard Honeycutt, CWA District 3 Vice President. “There is no excuse for OFS to refuse to give them the contract they deserve.”

“Putting workers in harm's way is never acceptable and after everything our essential workforce has been through in these past years, it’s time that employers are serious about putting safety first,” said Dennis Trainor, CWA District 1 Vice President.

Workers at four McClatchy-owned publications in Washington – the Bellingham Herald, Tri-City Herald, Tacoma News Tribune, and Olympian – reached a tentative agreement with management on a first contract. The workers, who are members of the Pacific Northwest Newspaper Guild (TNG-CWA Local 37082), fought for a contract that includes a minimum salary and an end to two-tiered salary floors, guaranteed raises in second and third years of the agreement, protections against outsourcing, a return to a 40-hour work week, a large restoration of pay for union members, and more.