CWA Verizon members have been saying it for months: Verizon is the poster child for corporate greed. A hard-hitting ad that started running on broadcast and cable television this week will help make sure that everyone recognizes Verizon for what it is: a greedy company that lines the pockets of executives with millions of dollars in compensation while trying to cut workers' benefits and destroy job security.

The 39,000 workers at Verizon, members of CWA and the International Brotherhood of Electrical Workers, have been fighting for fairness since before their contract expired last Aug. 1. Now they are saying, "Enough is enough."

Verizon made $1.5 billion a month in profits in 2015 – and $39 billion in profits over the last three years – while insisting at the bargaining table that workers accept major cutbacks in health care coverage, job security, pension protections, and benefits for injured workers. Verizon also adamantly refuses to bargain a fair first contract for wireless retail store workers in New York and Massachusetts.

"For a communications company, Verizon executives seem to have trouble hearing their customers and their workers," said Dennis Trainor, CWA District 1 Vice President representing Verizon workers from New Jersey to Massachusetts. "A company this profitable should not be making the wealth gap in America even worse by cutting benefits and destroying job security, while a handful of executives line their pockets with $50 million a year in compensation."

"Americans are outraged by what the corporate elite has done to working people in this country over the last 30 years," said Ed Mooney, CWA District 2-13 Vice President, representing workers in Delaware, Pennsylvania, Washington, D.C., Maryland, Virginia and West Virginia. "Verizon typifies everything that people in this country are angry about. If we have to walk, Verizon will be a national target for anger at corporate greed."

In a strike vote conducted last summer, 86% of Verizon workers supported walking off the job if a fair agreement cannot be reached. 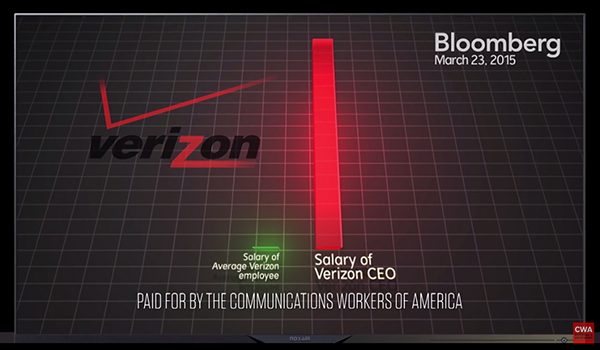