CWA members at Frontier Communications in California are bargaining for a new contract after a previous deal was rejected by the membership. During last week’s bargaining session, the bargaining team emphasized the workers’ overwhelming rejection of the previous tentative agreement and called on the company to get serious and hear the workers’ concerns on job security, healthcare, grievances, work from home conditions, and more. The members are ramping up their mobilization to strengthen their power at the bargaining table. Last Saturday the workers and supporters rallied to send a clear message to Frontier: “We aren’t going anywhere until we get a fair contract.”

Workers at Meow Wolf, an interactive arts and experience company in Santa Fe, N.M., have reached a tentative agreement for a first contract after over a year of negotiations. The agreement for a new four-year contract includes immediate and significant wage increases, guaranteed minimum salary increases every year, overtime for salaried workers, doubled parental leave and other benefits for working parents, guaranteed rest periods, just cause protections, and more. The workers hope this contract will be influential company-wide and set a new precedent for workers in creative industries everywhere.

The AT&T Mobility and DirecTV Orange bargaining teams are continuing negotiations for fair contracts. While there has been some movement in the right direction, CWA and the company remain far apart on several key issues on the table. The company continues to make inadequate offers on healthcare benefits that would put more financial burden on workers.

Members covered by the contracts have been mobilizing to increase their bargaining power and build solidarity. Workers have been holding workplace actions, displaying signs that send a clear message to AT&T: "Keep your hands off our healthcare!"

AT&T Mobility members held a week of action to raise awareness about the importance of shopping at stores that are staffed by trained, experienced CWA members. They distributed “Buyer Beware” leaflets that inform customers about the contract fight and the differences between authorized retail and union-staffed stores. The flyers also direct customers to visit cwa.org/attstore to locate a union-staffed store.

DirecTV workers in Huntington, W.Va., have also been engaging in workplace actions. Those who work from home changed their internal messaging system’s font to red and displayed other pro-union messages. Additionally, the DirecTV workers participated in social media actions and wore DirecTV hoodies customized with a message to the company: “I don’t need a hoodie, I need a fair contract.” 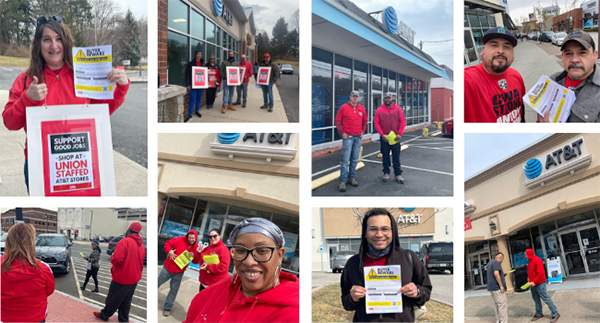 AT&T Mobility workers held a week of action distributing leaflets to educate the public about the contract fight and the differences between authorized retail and union-staffed stores.

eNewsletter Issue:
Mar 24, 2022 - Call Center Workers On Strike in Louisiana and Mississippi and other news