Workers at Mobilize, members of CWA Local 1101, have ratified a tentative agreement for a first contract that includes annual salary increases, just cause and layoff protections, recall rights, limits to contracting out bargaining work, increased paid parental leave, codification of the 40-hour work week, flexible scheduling, and more. Mobilize is a community-organizing app which is owned by political tech company EveryAction. The workers recently organized to form a union and won voluntary recognition, as part of the CODE-CWA’s effort to organize tech and game industry workers. The unit includes software engineers, sales representatives, and client support managers.

Workers at City Brewing Company in Latrobe, Penn., members of IUE-CWA Locals 88022 and 88144, took to the streets protesting against the company’s latest insulting proposal for a new contract. The contract was overwhelmingly rejected by the workers who cite seniority and overtime as the major issues that have placed them at odds with management. About 50 people, including members of CWA Locals 13000 and 13500 and other supporters, participated in the rally. City Brewery produces beers, teas, energy drinks, and soft drinks for a variety of small and large brands.

IUE-CWA members at City Brewing Company in Latrobe, Penn., participated in an informational picket for a fair contract.

As part of their fight for a fair contract, AT&T Mobility members are raising awareness about the problems at “authorized retail” stores that are not staffed by trained, experienced CWA members. Next week, members in 36 states, plus the District of Columbia, that are covered by the Orange contract, will be distributing leaflets that inform customers about the contract fight and the differences between authorized retail and union-staffed stores. The flyers also direct customers to visit cwa.org/attstore to locate a union-staffed store. Keep an eye on CWA’s social media accounts next week for posts that you can share to remind your friends and family members to always shop union! 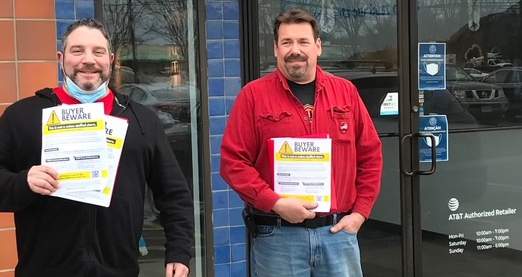 Members of CWA Local 1298 got a head start this week informing AT&T Mobility customers about their contract fight and the difference between authorized retailers and union staffed stores.