The AT&T Mobility Orange bargaining team reached agreement on a second three-week extension to continue negotiations for a fair contract. While there has been some progress, AT&T has not met CWA’s reasonable demands on healthcare, scheduling, compensation, and more. Notably, the company continues to offer proposals that could lead to skyrocketing health care costs with a devastating economic impact for people who get sick and need benefits the most.

At DirecTV, bargaining continues under a 72-hour rolling contract extension as members at call centers in Eden Prairie, Minn.; Huntington, W.Va.; and Englewood, Colo., mobilize to show the company that they won’t back down. 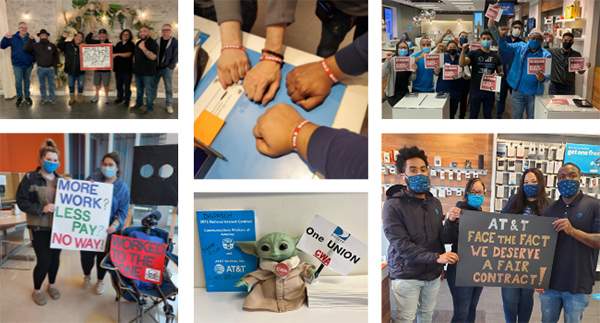 AT&T Mobility and DirecTV workers are mobilizing to strengthen their power at the bargaining table and improve their working conditions. Over the last few weeks, members have participated in workplace actions, rallies, and online actions to demand fair contracts.

CWA members at Frontier Communications in Connecticut (CWA Local 1298) and New York (CWA Locals 1170, 1111, and 1122) voted to ratify their new 3-year contract by a large margin. The contract includes wage increases, elimination of two-tier medical plans, and protection of call center jobs, and it retains the current 401(k) matching and pension plans. Throughout the bargaining process, members actively mobilized by writing emails, participating in rallies, engaging members of the public and elected officials, and preparing to strike for a fair contract.

Frontier Communications members in California rejected a tentative agreement reached with the company in January. Bargaining committee members have met with local presidents to discuss key issues and they are currently in communication with Frontier to resume contract negotiations.

“This contract will make an immediate difference in our lives at Piedmont,” said AFA-CWA Local 22061 President Keturah Johnson. “We work hard as aviation's first responders and deserve to be recognized within American Airlines Group. This contract provides real improvements overnight and throughout the length of the contract. As we work with Piedmont to get this contract fully implemented, we will also organize with Flight Attendants across our industry to negotiate for continued improvements that reflect the value we bring to our airlines.”

Workers at the Division of Emergency Medical Service in Cleveland, Ohio, members of CWA Local 4340, held an informational picket on Monday outside of city hall to draw attention to a contract dispute that has held up raises and benefits increases. The workers called on city officials to honor contract terms that have been tied up in a legal fight for years.