The AT&T Mobility and DirecTV Orange contracts, which were set to expire on February 11, have been extended for two weeks while negotiations for a fair contract continue. After multiple weeks of bargaining, AT&T has failed to meet CWA’s reasonable demands for a fair and equitable contract. Major issues at the table include comprehensive and affordable healthcare plans; retirement security and other benefits; numerous issues regarding authorized retailers; quarantine, pandemic, and natural disaster issues; job security; scheduling and other work from home issues for call center employees; safety issues for technicians working in hazardous conditions; and more.

The members have been ramping up their mobilization efforts to strengthen their power at the bargaining table and improve their working conditions. During Valentine’s Day, hundreds of members signed virtual “Valentine” cards calling on AT&T to “show the love for a fair contract.” 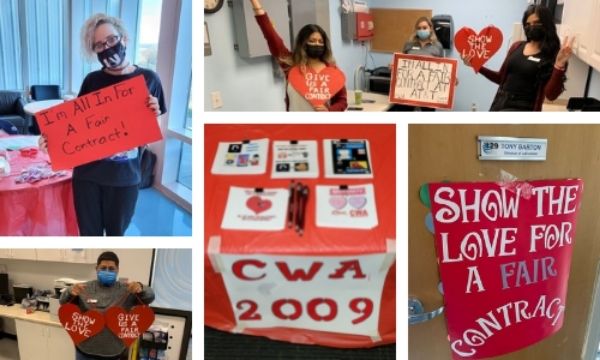 Workers for the Center for Biological Diversity (CWA Local 9415) have been engaging in multiple rounds of negotiations for a fair contract, marking a milestone for environmental justice workers in the United States. So far, they have reached tentative agreements on several key issues including non discrimination, no strike, no lockout, responsible union and employer relations, and more. The workers, who formed their union and won voluntary recognition in August of last year, are part of a growing union movement among workers at environmental and other nonprofit organizations, including the Sunrise Movement, Sierra Club, 350.org, Defenders of Wildlife, Human Rights Watch, Amnesty International, and the American Civil Liberties Union.

eNewsletter Issue:
Feb 17, 2022 - CWAers Share the Love for Valentine's Day and other news