In a new television ad released on Tuesday, CWA Local 1133 members who have been on strike since October 1 discuss the issues that they are facing and ask for support in their fight to protect patient care and safety.

“Nobody’s healthcare should suffer because their hospital refuses to hire enough staff, or won’t provide workers with enough supplies, but that’s exactly what Catholic Health has been doing for years,” Kim Hayward, an Environmental Service Worker at the hospital, says in the ad.

“We’re terrified for our patients because Catholic Health won’t give us the resources that we need to do our jobs, all while their top administrators make millions. Enough is enough,” they added.

The workers remain strong on the picket line, despite threats by Catholic Health CEO Mark Sullivan to take away their healthcare benefits.

“It’s disheartening to hear Catholic Health is considering taking away the healthcare benefits of its frontline workers who got Buffalo through the pandemic,” said CWA District 1 Vice President Dennis Trainor. “But I want to remind our members that through CWA’s relief fund, anyone with chronic conditions in need of care or those facing health emergencies will be taken care of.”

Visit www.safestaffingbuffalo.org/support-strike for information on how you can support the striking workers. 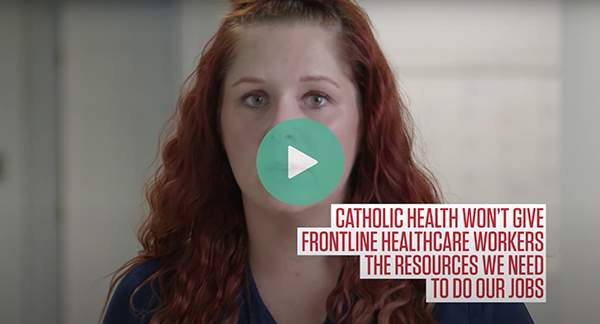 Striking CWA Local 1133 members at Catholic Health have released a television ad to ask for the public’s support for their fight to protect patient care and safety.

Last week, AFA-CWA Flight Attendants at Piedmont Airlines, a subsidiary of American Airlines, overwhelmingly voted to authorize a strike, with 100% in support of authorizing the strike.

The Flight Attendants have been engaged in contract negotiations for over three years. Negotiations stalled after management put forward an offer with minimal pay increases that are offset by higher health premiums.

Following the strike authorization, AFA-CWA could request that the National Mediation Board (NMB) declare that negotiations are deadlocked and release both parties into a 30-day "cooling off" period, which would then lead to a strike deadline. 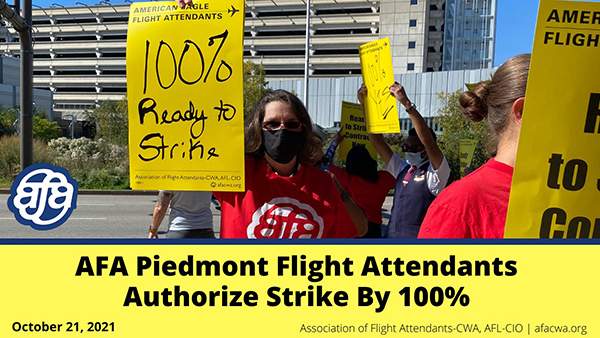 AFA-CWA Flight Attendants at Piedmont Airlines picketed outside of Philadelphia International Airport after voting to authorize a strike.