Workers at The New Yorker, Pitchfork, and Ars Technica announced landmark agreements yesterday on their first contracts with media conglomerate Condé Nast. The workers will be represented by the NewsGuild of New York, TNG-CWA Local 31003.

The agreements include substantial wage increases, limitations on future health-care cost increases, defined working hours for salaried employees, a ban on nondisclosure agreements related to discrimination and harassment, and measurable commitments on diversity and inclusion.

"Throughout two and half years of negotiations, our union remained steadfast in our commitment to improve the quality of life for ourselves and for future employees," said Natalie Meade, Unit Chair at the New Yorker. "Thanks to our members' hard work, the era of at-will employment and wage stagnation at The New Yorker is finally over." 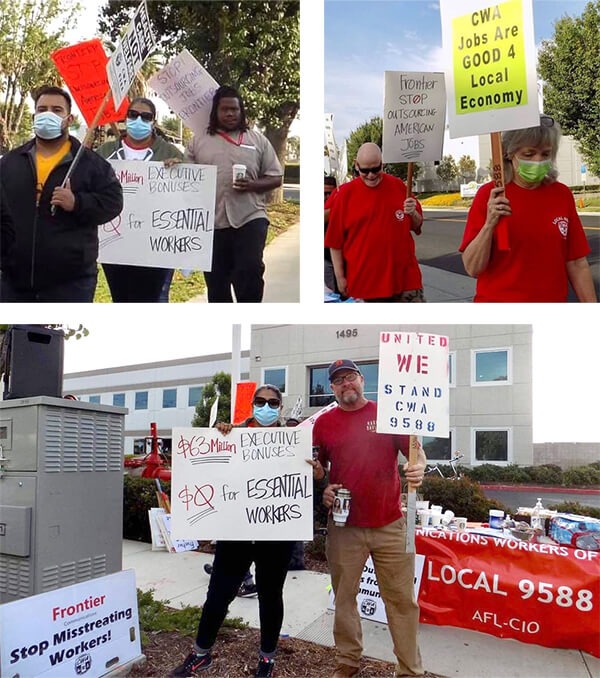 Members of CWA Local 9588 and allies in Ontario, Calif., mobilized at Frontier Communications last week to demand a fair contract ahead of negotiations.

Ocean County Board of Social Services

Ocean County Board of Social Services workers, who are members of CWA Local 1088 in Ocean County, N.J., reached a new agreement this month that provides significant pay increases, including 14% for the lowest paid members in the unit. Members made their demand for COVID-19 safety measures a centerpiece of their campaign.

In an article that ran in Labor Notes in early June, Jessica Coffin, a Human Services Specialist and CWA Local 1088 steward, said, "After months of working in fear, and with COVID back on the rise, we decided that enough was enough."

Mobilization committee members engaged their co-workers and members of the community in creative tactics such as setting off car alarms every day to coincide with informational picketing.

On May 27, Memnon Archiving workers at Indiana University in Bloomington, Ind., unanimously ratified their first union contract as members of CWA Local 4818. The workers had been negotiating for months under the added strain of furloughs due to COVID-19.

In an article in The Bloomingtonian this week, CWA Local 4818 President Richard Spires said safety issues were a priority, "We Memnon workers decided to pursue unionization due to unacceptable safety standards, wage rates, and lack of any benefits. Since our safety concerns needed to be addressed immediately, our first fight after voting to unionize was to clean up the safety issues within the building." Spires added that he hopes the efforts in Bloomington will open up discussions about injustices throughout the industry.