After almost eight months of negotiations, the CWA District 2-13 Bargaining Committee reached a Tentative Agreement for a first contract with Altice in West Virginia for a four-year contract.

The agreement provides, among other things, job security, grievance and arbitration rights, and guaranteed pay raises.

As bargaining continues, members of CWA Local 3176 in Central Florida who work at CenturyLink are continuing to push the company for a fair contract.

Since the merger of CenturyLink and Level 3 Communications, the company, led by L3 CEO Jeff Storey, has been trying to replace union workers with contractors and driving down the quality of working conditions in an effort to have a higher profit margin. 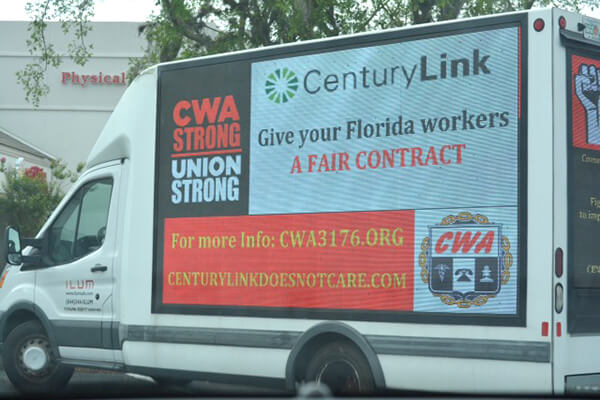 As members of CWA Local 3176 continue to bargain with the company, a mobile billboard to get CenturyLink to recognize that its workers want a fair contract made appearances at the CenturyLink building in Ocala.