After eight weeks, AT&T finally relented and called the committees for AT&T Midwest and Legacy T back to the bargaining table. Unfortunately, the company made no improvement to their offer on jobs or employment security.

AT&T needs to invest in CWA members, their employees, and in the communities they serve. A widely-shared article in The Guardian this week highlighted AT&T's continued offshoring and outsourcing despite the company's huge tax windfall and record profits.

The CWA bargaining committees are urging members to continue to mobilize by using political pressure, media, and community involvement to tell the company that they must bargain fair contracts for all of our members. 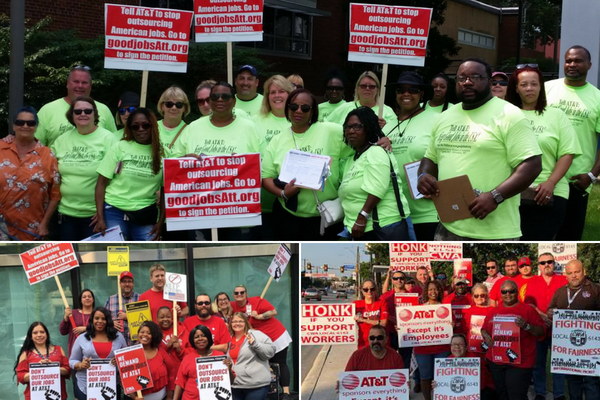 Today, Miami Airport workers from Envoy Air, members of CWA, were joined at a rally by State Senators Jose Javier Rodriguez, State Representative Robert Ascencio, Congressional candidate Debbie Mucarsel-Powell and other leaders and community allies to demand that American Airlines CEO Doug Parker negotiate in good faith with more than 200 employees at MIA who are earning as little as $9.48 an hour.

“No one working full-time at a profitable company like American should have to rely on public assistance or help from friends and family just to meet their basic needs,” said Envoy Agent Mary De Mesa. “But even after a big tax break, the company is lining its pockets instead of investing in people like us who work hard every day to make American successful. At Envoy, we work very hard under extreme weather conditions, and work 16-hour shifts, just to make ends meet.”

“My coworkers and I are standing up for a living wage for all MIA workers,” said Elizabeth Alonso. “We work hard, but for many of us, wages are too low to afford basics like food and rent. We’re here today to make a change at Envoy. We’re here to fight for fair wages, safety, and high-quality customer service at this airport.”

At MIA, airlines and other service providers have faced mounting criticism around poverty wages. Envoy Air now plans to exploit a loophole in the Miami Dade County living wage ordinance exempting those directly employed by airlines to cut the pay of hundreds of wheelchair workers currently providing service to American Airlines passengers by 40%, from $16 an hour to $9.50.

“There is no justification for giving some workers a living wage while others don’t make enough to keep food on the table for their families,” said Envoy Agent James McKnight. “MIA workers have stood together and today I’m here to join them. Living wages are key to building a strong future for our families, our communities, and this airport.”

More than 9,000 CWA passenger service agents at the two American Airlines regional subsidiaries Envoy Air and Piedmont Airlines are in negotiations with the company to achieve living wages and fair contracts.

Miami Airport workers from Envoy Air, members of CWA, were joined at a rally by elected officials, leaders, and community allies to demand that American Airlines CEO Doug Parker negotiate in good faith with more than 200 employees at MIA who are earning as little as $9.48 an hour.