Last week, the CWA bargaining team reached a tentative agreement with Envoy Air that raises wages, establishes work rules, and improves benefits and job security over the previous TA. The agreement also includes a ratification and retention bonus based on each agent's years of service in recognition of the time spent in negotiations and to encourage retention.

"For more than two years, CWA members at Envoy have stood strong in their fight for a contract with fair, family-sustaining wages and a contract that treats them with the respect they deserve," said CWA President Chris Shelton. "Thanks to the dedication of our members, we now have a strong agreement that gives Envoy agents increased wages, improvements on numerous benefits, and better opportunities for agents moving forward as they continue to make Envoy successful."

Click here to learn more details about the agreement.

As bargaining opened on Monday with AT&T Southeast for about 22,000 CWA members, the CWA bargaining team emphasized the need for AT&T to share its record-breaking profits with the people who make it all possible – its employees.

"If you were to visit any work center or call center across [CWA] District 3, you would discover that your employees, our members, are not treated with the respect they have earned and deserve," said Richard Honeycutt, Vice President of CWA District 3, in opening remarks to the company.

Though the company claims that recent job cuts announced before Father's Day including more than 900 in the Southeast are a result of a lack of work to be done, AT&T has increasingly turned to contractors to perform CWA members' work in call centers and in the field.

"We start this bargaining session demanding AT&T show our hard-working members the respect and loyalty they deserve. This can be done through better wages, benefits, improved work rules, and job security. Give work to your employees – CWA members – not the employees of other companies," Honeycutt said.

The current contract expires on August 3, 2019. 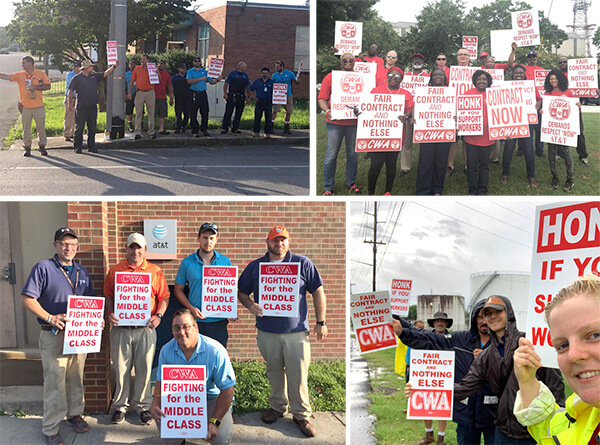 CWAers mobilized as bargaining began to show AT&T Southeast that they are ready to fight for a fair contract.

On Monday, the Union Coordinated Bargaining Committee (CBC) of IUE-CWA and five other member unions at GE reached a tentative agreement containing several general wage increases spread over four years and controlling employee healthcare costs. IUE-CWA local union delegates voted to recommend the agreement to their members, and will be returning to their locals to share the details of the agreement. Each local will have an informational meeting, and a membership vote will be scheduled.

"Hawaiian Airlines is successful and growing, in large part due to previous sacrifices and persistent work of Flight Attendants on the front lines," said Sharon Soper, AFA-CWA Hawaiian Airlines President. "Two years of negotiations is too long to negotiate a new contract that reflects our contributions and hard work. We are done with delay tactics. Public protest will continue as we turn up the heat all summer long and until we get this done."

CWA members are continuing to call on Nokia to stop eliminating U.S. jobs, sending work out of the U.S. to overseas locations, and putting retirement security and healthcare at risk for its current employees and retirees. The company is trying to eliminate U.S. telecommunications installers by offshoring good jobs and terminating its own highly-skilled U.S. workforce. These actions will cause U.S. workers to lose their jobs and place the health and security of tens of thousands of retirees at risk.

Nokia wants access to lucrative 5G business opportunities in the United States as well as taxpayer-funded government contracts. CWA members and concerned citizens have been writing letters and signing a petition urging President Trump and Congress to tell Nokia the federal government will not reward Nokia with federal contracts for killing U.S. jobs and putting healthcare and retirement at risk for thousands of workers and retirees.