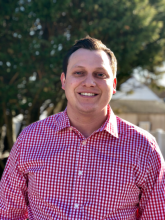 Justin Tapia grew up in tiny, rural Snow Hill, Maryland, and nearby Salisbury, where he began his career as a Consultant at a Verizon call center after college. He still lives in Salisbury with his labor activist wife and their young son. In 2016 Justin attended a strike rally in New York City, where he witnessed firsthand the power of 40,000 Verizon workers and CWA members taking to the streets. He discovered he was passionate about representing his coworkers and became a shop steward, a Maryland state trainer, Executive Vice President of Local 2106, and District 2-13 Next Gen Lead Activist.

Justin is motivated by witnessing young workers who realize the power of solidarity. He wants to bridge the gap between past and present generations. Justin hopes he can help other union members pass along their knowledge, create a better life for all workers, and ensure the future of the labor movement.