What We Do Well 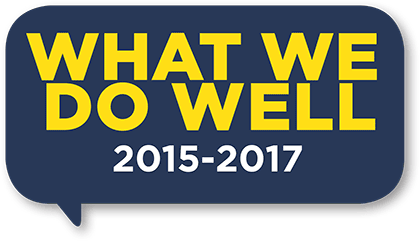 Since our last convention, we rallied, mobilized, organized and picketed. At Verizon, thousands of us embarked on an historic 49-day strike and AT&T Mobility members held our first ever strike. IUE-CWA members stood strong one day longer than Momentive in a 105-day strike. Our bargaining teams negotiated contracts covering tens of thousands of CWA members across our industries and sectors. Thousands of workers in the airline industry, telecom and wireless, customer service and more gained a CWA voice. We engaged in civil disobedience, marched for democracy and civil rights, and demanded pension fairness. We’re proud of our solidarity and our union.

Since 2015, we’ve bargained hundreds of contracts covering more than 200,000 CWA members in every sector of our union. These are some of the highlights.

United Airlines
AFA-CWA United Flight Attendants from around the world ratified an industry-leading contract covering 25,000 at United, Continental and Continental Micronesia, now covered by one contract. Flight Attendants held informational picket lines and mobilized for many months as part of their fair contract fight.

One Day Longer at Momentive
About 700 members of IUE-CWA Locals 81359 and 81380 at Momentive Performance Materials in Waterford, N.Y., and Willoughby, Ohio, stood strong for 105 days, fighting for a fair contract. New York Governor Andrew Cuomo was directly involved in the negotiations and many elected officials joined Momentive workers on the picket line.

The Nation
Members of NewsGuild-CWA Local 31003 ratified a six-year contract with the Nation that provides for four months of parental leave, among other gains.

Avaya
CWA gained a seat on the Avaya Creditor Committee to safeguard the interests of 550 active members and 4,000 retirees while the company goes through bankruptcy.

E-ZPass
CWA members of Local 1102 in Staten Island, N.Y., ratified a four-year agreement that beat back concession demands and provides for wage increases, among other improvements.

TYCO
In District 6, members of Local 6215 ratified a contract at TYCO.

State of Missouri
Members of Local 6355 ratified a three-year agreement with the Missouri Departments of Social Services and Health and Senior Services covering 6,000 social workers and public health workers.

West River Telecom
Members of Local 7301 in North Dakota fought back against management demands to cut pensions and benefits and ratified a contract.

In the past two years, more than 20,000 new members, across every industry and sector, have joined CWA.

DIRECTV
More than 8,000 Call Center workers, technicians, administrative, and warehouse workers joined CWA since AT&T acquired DIRECTV in 2015. The 800 workers at the DIRECTV call center in Huntsville, Ala, were the first to say, "CWA Yes."

T-Mobile
T-Mobile workers established Local 6457 as workers continue to organize and elect national stewards. Working with our German union partner ver.di, TU members are fighting management’s attempt to set up a company union. Workers have gained fairer work scheduling policies and took on management threats to fire workers who want to speak out on the job about workplace conditions. The NLRB handed down several decisions calling out T-Mobile for these and other illegal actions.

ABC and NBC Sports
Over the past three years, more than 1,500 technicians and other workers who broadcast sports joined NABET-CWA.

Bo Robinson Assessment and Treatment Center
A group of 21 lead workers at this treatment center in Trenton, N.J., voted for representation by CWA Local 1040. The local now represents 86 workers at the center, including operations counselors and shift supervisors.

Corus Entertainment
The 49 broadcast, technology, and other television workers at Corus Quay in Toronto, Ont., voted to join the Canadian Media Guild/CWA Canada.

The Guardian US
Some 45 writers and staff at the online newspaper, the Guardian US, voted for TNG-CWA Local 31222 representation.

USIC
The 110 workers at USIC, a contractor that performs utility location work for Verizon, Con Ed, and other companies, voted to join CWA Local 1101.

GoJet
Some 450 Flight Attendants at GoJet voted for AFA-CWA representation.

VICE Canada
Some 150 employees across Canada voted to join the Canadian Media Guild, Local 30213. VICE Canada includes a network of digital channels, a production studio, a magazine, an in-house creative services agency, and a TV network.

The following highlight some of the smaller units where workers voted for CWA representation, including many that are part of CWA’s broader organizing strategy.

Since our last convention,CWAers mobilized for these nationwide campaigns and issues.

Stop the TPP
After five years of grassroots activism, including protests in nearly every state, CWA activists and our broad coalition of workers and unions, community and environmental groups, faith organizations, and many others, defeated the Trans-Pacific Partnership trade deal. CWAers met with members of Congress and staff in Washington and their home districts, generated tens of thousands of hand-written letters and phone calls, and joined CWA’s TPP and boot camp training, convincing Members of Congress to abandon this bad deal for workers and communities.

Women’s March on Washington
Thousands of CWA women and men joined the million people who came to Washington, D.C., and rallied across the country the day after the presidential inauguration. Protestors stood together for justice and dignity for all and to protect our rights, our safety, and our communities. CWA President Chris Shelton told the crowd of CWAers, "Today is the first day of our fight, and we will win."

Stop Offshoring Call Center Jobs
The U.S. Call Center Worker and Consumer Protection Act was introduced in the House and Senate this year, to curb the off-shoring of good U.S. jobs and provide protections for workers and consumers. CWA customer service members collected petitions to Members of Congress at workplaces and rallied with congressional sponsors to build support in Pennsylvania, Ohio, West Virginia, Missouri, and other states.

Take on Wall Street
About 10,000 CWAers joined the initial telephone town hall call that launched the Take on Wall Street campaign. CWA activists are mobilizing to close the tax loophole that’s been a giveaway to hedge fund managers, for a tax on Wall Street speculation, and to keep the consumer safeguards enacted following the Wall Street meltdown in 2008. Hundreds of CWAers have joined one-day workshops and boot camps.

Bank Workers Take on Wells Fargo, Santander
In testimony, rallies and actions, CWA activists and the Committee for Better Banks spotlighted aggressive sales goals required by Wells Fargo that resulted in the Consumer Financial Protection Bureau and regulators levying record fines of $185 million against the bank. The CEO resigned after hearings on Capitol Hill made clear the extent of this abuse, and the bank was forced to change its practices. Santander Bank, where workers are joining CWA, was fined $10 million and ordered to stop enrolling customers in overdraft protection without their informed consent.

Protection against Airport Rage
Passenger service agents won confirmation from the Department of Justice that they are covered under a federal law passed in the aftermath of Sept. 11, 2001, that makes it a felony to assault workers at airports engaged in security related duties.

Texas Attacks on Public Workers
CWAers in Texas, who have beaten back "paycheck deception" measures, are gearing up for the special legislative session in July where the governor will again go after payroll deduction for union dues.

Leah’s Law
N.J. CWA members worked hard for passage of Leah’s Law, to better protect workers at the New Jersey Department of Children and Families. The law was passed by strong votes in the Assembly and Senate, but was vetoed by Governor Chris Christie. The bipartisan legislation was named for CWA Local 1038 member Leah Coleman who was stabbed more than 20 times by a deranged client in November 2014 and nearly lost her life.

Journey for Justice
America’s Journey for Justice covered nearly 1,000 miles from Selma, Ala., to Washington, D.C., as CWA members and leaders joined civil rights and community activists. The march focused on restoring voting rights that were stripped away by the U.S. Supreme Court’s Shelby decision.

Democracy Awakening
Members of more than 300 groups filled the U.S. Capitol for Democracy Awakening. More than 80 CWA activists, including President Shelton, engaged in civil disobedience and were arrested as thousands demanded fair voting rights for all and an end to corporate control of our democracy. CWAers came by bus, van, and car from Birmingham, Ala.; Little Rock, Ark.; Rochester, N.Y.; Kansas City, Mo., and communities in New Jersey, North Carolina, Virginia, Maryland, and Ohio.

Fight for $15
CWAers and allies took to the streets in hundreds of cities as momentum continued to build for a fair minimum wage and more. Activists demanded a union voice, paid sick days, fair scheduling, and a $15/hour minimum wage. Actions have been held in Minneapolis, New York, Houston, Albuquerque, Wichita, Raleigh, Dayton, Rochester, Denver, Detroit, Chicago, Cleveland, Columbus, Milwaukee, and other cities.

Nokia Alcatel-Lucent Pension Fight
CWA’s Telecommunications and Technologies Sector filed a lawsuit to stop the pension fund grab by Nokia. The company moved 20,000 retirees and $3 billion from the pension plan covering retired workers and surviving spouses into the underfunded management pension plan. This jeopardizes not only the future assets of retired workers but restricts the fund's ability to support retiree health care and other benefits, a required provision under the existing contract.

CWA Presidential E-poll
Ahead of Election 2016, CWA held the most democratic process of any union as members engaged in months of worksite membership meetings and online voting for the CWA presidential political endorsement process.

Fight for Clean Water in Flint
Members of CWA Locals 4009, 4013, 4034, 4123, and CWA staff joined hundreds of union and community supporters outside the state Capitol in Lansing, Mich., to protest the lead-poisoned water that has harmed the health of thousands of people, especially children, in Flint.

Stop Outsourcing in Tennessee
United Campus Workers/CWA Local 3865 activists and allies flooded the Tennessee State Capitol and are continuing their mobilization to protest Governor Bill Haslam's scheme to outsource all facilities maintenance, management, and security at state colleges and universities and other state institutions.

No Robots Allowed
CWA activists and grassroots allies forced the withdrawal of an anti-worker Secretary of Labor nominee. Andrew Puzder, the fast food CEO who prefers robots over workers, withdrew his nomination after rallies, phone calls to Senators, and protests nationwide.