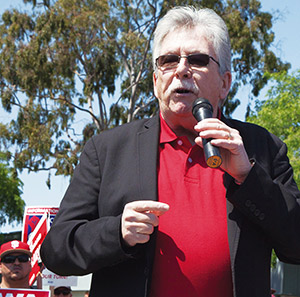 In February, the U.S. Supreme Court heard arguments in Janus v. AFSCME, a case brought by anti-union corporate interests and political groups intent on restricting the freedom of working people to stand together for respect and fairness in the workplace.

These groups have spent millions of dollars for decades to take away workers’ freedom to join together and negotiate for fair wages and benefits, and to improve our workplaces. This is at least the third time they have brought this particular issue to the Supreme Court while also pursuing state legislation to limit workers’ freedom to join unions and negotiate contracts collectively.

These well-financed and powerful groups have gotten states to adopt laws requiring workers who have had a union for years to hold new union elections every year or when their contract expires to “recertify” the union. They have pushed state legislation to outlaw the deduction of union dues from workers’ paychecks in an attempt to weaken unions. They have schemed to stop workers from having any say in our democratic political process.

Under the new Republican majority National Labor Relations Board, we’ve already seen many rule changes that make it harder for workers to join unions and easier for companies to evade labor law.

Why these attacks? Employers and their political allies want to do away with unions. It’s as simple as that. Without unions, employers will be free to do whatever they want and further change labor law and workplace safety protections and retirement protections. Without unions, wages, working conditions, health and safety regulations, retirement security, and benefits all will be dramatically transformed.

Labor law requires that a union, chosen by the majority, must represent every worker in a bargaining unit. While no worker is required to join a union, workers can be required to pay their fair share for the cost of the representation -- the cost of bargaining higher wages and benefits and the cost of representing a worker through the grievance system. The attack on fair share is all about weakening unions, with the hope of giving corporations even more power and accelerating the assault on achievements like Social Security, civil rights, wage and hour and safety laws, Medicare, and public education that unions fight every day to preserve.

By destroying or dramatically weakening unions, corporate and right wing allies hope to get rid of the major opposition to anti-worker legislation and protections. They want to have free rein to further cut the programs, benefits and services that millions of American families depend on.

These anti-union groups are anticipating a favorable ruling by the Supreme Court that they believe will signal the end of public worker unions, and all unions.

CWA members in Iowa overwhelmingly are voting for continued CWA representation, despite Iowa's onerous “recertification” law. CWA public workers in New Jersey mobilized and voted in record numbers and see the promise of a new governor who will restore pension benefits and other job rights that were stripped away. During the last three legislative sessions in Texas, CWAers fought off attacks on the right to organize and to stop bills that would have blocked state workers from joining the union through payroll deduction.

We’re seeing success stories like this across our union.

The Supreme Court will issue its decision in June, but no matter how it rules, CWA will stand up and fight for just contracts, jobs and retirement security. CWA will continue to speak out and fight back against the 1 percent who are never satisfied and always seek more off the backs of workers.