CWA members never stop organizing. The founders of our union made uniting workers into a single cohesive labor union the first item in our constitution's list of objectives. As union members, we recognize our responsibility to help other workers win a voice at work through collective action.

Since the beginning of 2020, nearly 15,000 new members, across every industry and sector, at workplaces large and small, have joined CWA. The pandemic made it clear that workers, not corporate executives, are essential to our economy. Support for unions is at an historic high. Hundreds of thousands of workers have seen through the empty promises of bosses and realize that the only way to make lasting change at work is through a union contract.

Thousands of Newsguild-CWA and NABET-CWA members work in the media sector, and the media’s tech workforce is growing as media companies work to expand and innovate online.

At National Public Radio, digital media workers organized and won voluntary recognition, joining NPR broadcast employees as members of NABET-CWA Local 52031. When a strong majority of the tech workers at the New York Times sought voluntary recognition for a new unit of the Times Guild (Newsguild-CWA Local 31003), management launched an anti-union campaign. The workers fought back, engaging in a one-day work stoppage. On March 4, after many company-initiated delays, the workers won their union representation election.

As awareness of workplace abuses in the video game and entertainment industries has grown, workers are taking an active role in raising standards by organizing to join CWA. Our new members at Vodeo (CWA Local 9510), Image Comics (CWA Local 7901), Meow Wolf (CWA Local 7055) and Second City (CWA Local 9400 and CWA-Canada) and Activision’s Raven Software Studio workers organizing in Wisconsin are part of this wave.

Fighting for collective bargaining rights for public workers who have been on the frontlines providing essential services to communities throughout the pandemic is more necessary than ever, and CWA members are rising to the challenge.

In states like Florida, Colorado, New Mexico, Georgia, and Arizona, CWAers have been successfully mobilizing to urge lawmakers to use funds from the American Rescue Plan Act (ARPA) to support good jobs for public workers. Under President Biden’s plan, which was passed by Congress in early 2021, these funds can be used to restore public sector jobs lost to the pandemic, engage in new hiring, secure pay raises, and provide premium pay to essential state and local workers.

During the summer of 2020, paraeducators in Lawrence, Kansas won recognition for their union after a four-year fight. The unit expanded a year later to include all classified staff in the school district. “We have struggled as a union through difficult times. We continued to fight so that all classified staff could receive adequate training, support, and a living wage,” said Hannah Allison, Interim Local President, PAL-CWA Local 6400.

Since early 2020 CWA Local 7799 in Colorado has welcomed higher education workers from the University of Colorado system, nurses and other frontline workers from Denver Health and UC Health, and Denver Public Library employees. They have made passing state legislation that would require public sector employers to bargain in good faith with union workers a focus for 2022.

There is no federal law that protects the freedom of state and local public service workers to join a union. That’s why, in addition to working to pass state legislation, CWAers are fighting to pass the Public Service Freedom to Negotiate Act which would establish federal protections guaranteeing public service workers the right to join together and collectively bargain. You can learn more at CWA.org/public-service-freedom-negotiate-act.

Putting Pressure on International Corporations to Honor Workers’ Rights in the U.S.

When companies based in countries with strong labor laws begin operating in the United States, they have a choice. They can take the high road and allow their U.S. workforce the same opportunity to join a union as other employees have. Or they can follow low road union busting practices that are common among U.S. employers.

AFA-CWA members guided Norse Atlantic Airways to the high road. In mid-2021, after the airline announced plans to launch service between Europe and the U.S., AFA-CWA leadership began discussions with company executives. A similar airline’s attempt to begin U.S. service stalled for years when AFA-CWA flight attendants mobilized and successfully opposed its attempt to misclassify flight attendants as contractors. Perhaps taking a lesson from that experience, Norse Atlantic management reached a neutrality agreement with AFA-CWA, committed to recognizing the union once a majority of the company’s flight attendants  have signed membership cards, and negotiated an industry-leading contract, subject to ratification.

Italian eyewear manufacturer Luxottica has taken the low road. The company’s Italian workers are union members, but the company has launched an aggressive anti-union campaign against workers in McDonough, Georgia who are organizing with IUE-CWA. The company has even gone as far as using a mobile application that was supposed to be oriented towards health and safety issues around COVID to send out anti-union messaging to workers. Italian union members have expressed solidarity with the workers in Georgia.

“My co-workers and I are fighting to form a union so we can have a voice on the job. We are coming together to fight for respect, safe working conditions and fair wages. We want to join with our sisters and brothers at Luxottica in Italy, who already have a union. We believe Luxottica should support a union for its workers, whether they are in Italy, or in the U.S.," said Lisa Ragsdale, who works at the McDonough facility. 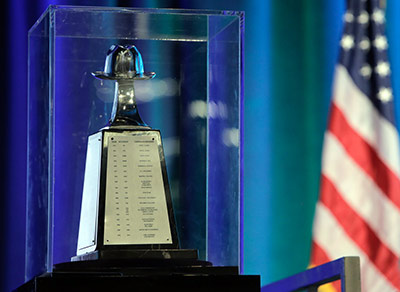 The Hat Award for outstanding achievements in organizing is named in honor of CWA's founding president, Joe Beirne, who would pass his hat at each organizing meeting to collect the funds he needed to cover travel costs of getting to the next group of telephone workers he was to visit. It is CWA's highest honor. Last fall, CWA President Chris Shelton presented the Hat Award to CWA Canada, CWA Local 2336, CWA Local 1400 (Alphabet Workers Union), NABET-CWA Local 52031, CWA Local 1101, TNG-CWA Local 31222, and CWA Local 9410. These locals have brought more than 2,000 new high tech workers into CWA from established tech platforms to Silicon Valley startups, from media tech workers to digital ads and communication firms.

You can watch the full awards ceremony at CWA.org/cwa-awards.

While CWA’s collective bargaining agreements with AT&T require the company to recognize the union when a majority of new groups of workers sign cards, the company initially refused to recognize a group of AT&T Mobility In Home Experts (IHX) in Southfield, Michigan. The workers pushed forward, and filed an election petition with the National Labor Relations Board (NLRB). In response, the company launched an aggressive anti-union campaign and used a series of tactics to delay the election, including an appeal to the full NLRB that resulted in the ballots being impounded. Nevertheless, with the backing of 100,000 CWA members at AT&T, the workers fought back tirelessly and won the appeal. The process also resulted in a ruling that had a positive impact on future cases by narrowing the scope of a previous anti-union decision.

“I am so excited to finally get to have our votes and voices part of the conversation,” said Mitchell Deachin, an IHX worker from Southfield. “It has been a long time coming and I believe this will be a great turning point to bring us all together. Stronger Together!”

Since this victory, AT&T has agreed to remain neutral when IHX workers organize and to honor the majority sign up recognition process - sometimes called card check. In addition to the workers in Southfield, IHX workers in Arkansas, Illinois, Nevada, New York, New Jersey and Maryland have joined CWA.

While our gains in organizing over the past two years have been impressive, our current labor laws are preventing millions of workers from joining unions.

President Biden’s Task Force on Worker Organizing and Empowerment recently released a report detailing actions that the President and federal agencies can take to enable more workers to join together in unions. The President has already overturned Trump administration policies that limited the collective bargaining power of federal employees, and he has signed executive orders improving wages and job security for federal contractors.

But for 85 years, corporate special interests have spent billions to deploy an army of lobbyists and lawyers to orchestrate a relentless campaign to disempower working people. Workers’ rights have been totally gutted. The President, by himself, cannot undo this damage. We need for Congress to act.

Check out this inspiring video to hear from some of our newest members about why they joined CWA.

The PRO Act, like the Public Service Freedom to Negotiate Act, would be a game-changer for millions of workers by making it easier for them to join unions and win collective bargaining agreements.

We will continue to work hard to pass the PRO Act reforms. But it won’t be easy. Senate filibuster rules make it possible for a minority of Senators to stop almost any piece of legislation.

This fall we will mobilize to elect members of Congress and Senators who are prepared to do everything within their power to make the PRO Act the law of the land.

The PRO Act would:

When friends express interest in improving their working conditions, connect them with an organizer.