Communications Workers of America Welcomes You to #nn11

CWA represents 43,000 workers at AT&T Wireless. Unlike Sprint, Verizon Wireless and T-Mobile, AT&T does not stand in the way of a worker’s right to organize and collectively bargain. T-Mobile is up for sale, and a merger with AT&T will give more than 20,000 T-Mobile workers a real opportunity to form a union without fear of being fired.

Help us protect workers' rights on the job:

To learn more about T-Mobile workers who are fighting for collective bargaining rights at T-Mobile USA, visit WeWorkBetterTogether.org. 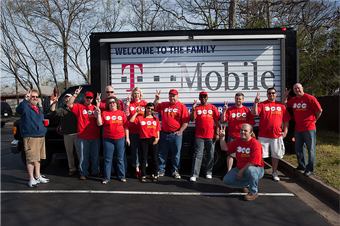 Fighting for Affordable High-Speed Internet for All Americans

CWA’s Speed Matters project has brought together groups like the Sierra Club, the National Education Association, and the Alliance for Digital Equality to push for policies that will bring affordable, high-speed Internet connections to all Americans.

High-speed broadband is the essential infrastructure for the 21st Century global economy, but millions of Americans do not have access to high speeds. Those living in rural areas are 20 percent less likely than their urban counterparts to subscribe to high-speed broadband.

Stop by the AFL-CIO booth to pick up a "Delta: Stop Union Busting" sticker