Thanks to the dedication of CWA members across District 3 who stayed strong on the picket lines throughout a historic four-day unfair labor practice strike, CWAers reached a “handshake deal” with AT&T Southeast on Tuesday on a new collective bargaining agreement for more than 20,000 AT&T employees in nine states.

Workers across the district walked out at midnight on August 23 because AT&T was not bargaining in good faith and failed to send representatives to the bargaining table with the authority to make decisions. In a separate action, CWA members in South Florida initiated an unfair labor practice strike on August 22 after the company disciplined members for wearing union memorabilia and for participating in activities that are protected under the National Labor Relations Act.

“CWA members’ spirit and solidarity over the last four days showed the company that we would not back down until they bargained with us in good faith,” said CWA District 3 Vice President Richard Honeycutt. “This was a historic strike that showed the power that working people have when they join together.”

The action by CWA members was the largest private sector strike in the south in a decade, and was featured in hundreds of local and national news stories. Senator Bernie Sanders addressed strikers in Louisville, Ky., Senator Elizabeth Warren and former Vice President Joe Biden posted tweets in support of the workers, and local elected officials joined picket lines across the region.

As the strike began, a CWA delegation of AT&T call center workers was in the Philippines to investigate AT&T’s offshoring practices, and workers at AT&T subcontractor Alorica pledged to monitor calls in case the company attempted to send calls that would have been handled by striking workers to their centers. Telecom workers from 66 countries showed their solidarity at the Uni Global Union conference in Kuala Lumpur, Malaysia, and the Unifor Union in Canada sent a letter of support. 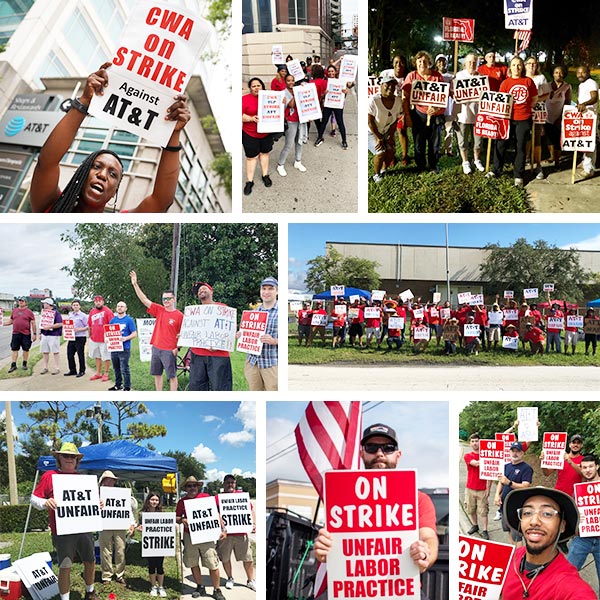