Our union is helping take the fight for a fair workweek to Albuquerque. 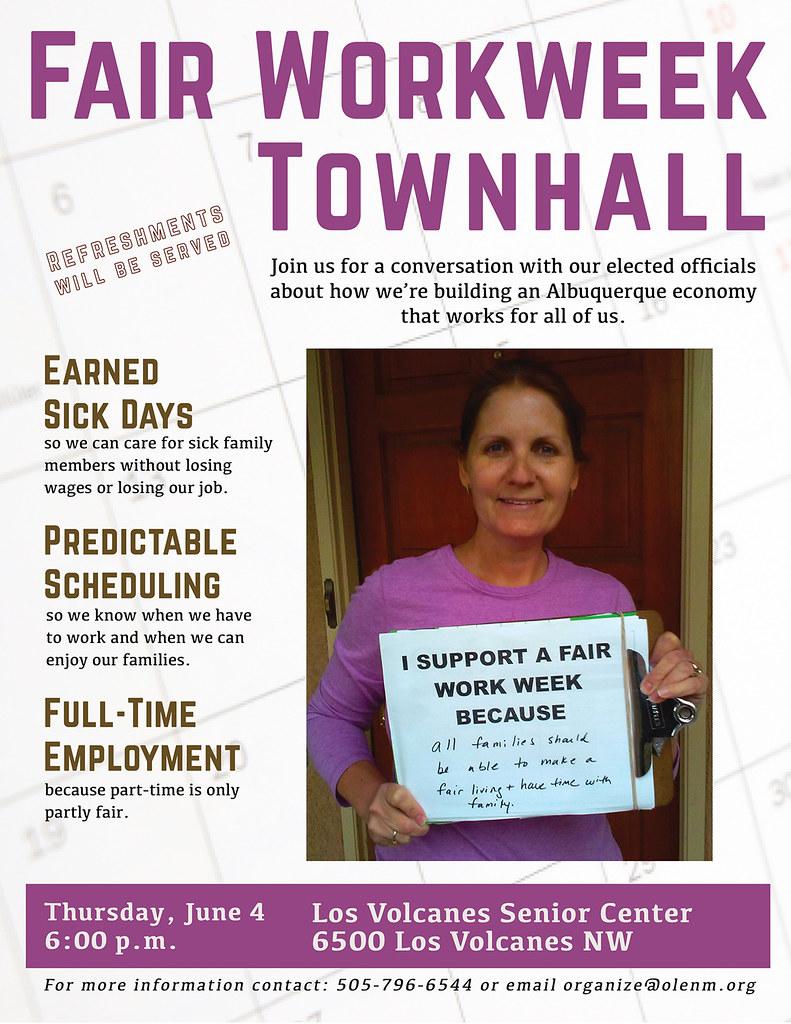 Tonight, CWA and TU are partnering with the Center for Popular Democracy and local community organization OLÈ to host a town hall discussion with elected officials about how to build an Albuquerque economy that works for all workers. They'll be tackling earned sick days, predictable scheduling and full-time employment.

Organizers are hoping to turn out about 100 people, and Albuquerque City Council members, Isaac Benton and Klarissa Peña, who will soon consider common sense policy solutions that invest in working families and give hourly workers a chance to succeed, will be in attendance. The crowd will be hearing from several TU members, including Luis Castaneda and Ashley Charzuk.

"The Fair Work Week Initiative ABQ is important to me, so I can actually take time off without being penalized for it and can get a schedule that works for me and my family," said Charzuk, a retention representative at a T-Mobile call center in Albuquerque.

The community is building off a recent success at T-Mobile. Just last month, the company announced important nationwide changes regarding its workers' ability to request and receive time off, following weeks of public pressure by its Albuquerque call center workers.

Up until the change, each day the company allots a certain number of "pre-approved time-off" (PRETO) hours that workers can use on a first come, first serve basis. If a worker wakes up sick, he immediately calls in to claim those hours. But if a second worker also calls in sick, those PRETO hours may be used up. As a result, that second worker is given a "Today Code," similar to being written-up, which has a negative effect on the employee's rank and end-of-the-year bonus.

On May 15, T-Mobile announced that it would be doubling the amount of PRETO hours available for workers to request off, so it'll be easier for employees to get the time off they want, when they want it.

The change was announced shortly after Charzuk joined the Center for Popular Democracy on a national press call to discuss the organization's latest report, "Hour by Hour: Women in Today's Workweek." Charzuk explained that in order to care for their young daughter, she and her husband were forced to choose between his night shift job and her inconsistently schedule job at T-Mobile. In the end, her husband quit his job, so Charzuk could keep hers. It's just one of the sacrifices her family has had to make because of T-Mobile's unfair scheduling.

Another T-Mobile call center worker in Albuquerque, Nancy Chacon, explained in the report how her monthly performance dictates her schedule. Chacon, who is putting herself through school while also supporting her family, said, "I had a situation where I needed a day for a doctor's appointment, and one for a school exam. Both dates were denied for approval even though I had requested them three months in advance."

While CWA welcomes this scheduling change, it is not enough. Workers still need approval to receive time off and oftentimes the approval is not granted. When workers get sick or need to take care of sick family members, they risk being written up if their request for time off is not approved. Workers need the ability to have access to last-minute time off without being penalized.

New Mexico's Bernalillo County has almost 472,000 hourly workers – nearly two-thirds of its total workforce – who would benefit from updating workplace protections to match our modern workweek, according to a new report that will be released at the town hall.

That's why we're growing a coalition to restore a fair workweek.