Hundreds of bank workers and their supporters from across the country occupied the lobbies of Wells Fargo and Bank of America branches in downtown Los Angeles this week to protest declining working conditions at major U.S. banks. Activists unveiled a set of demands to guarantee better banks for communities and bank workers.

Members of the Committee for Better Banks, a national coalition of bank workers and community groups, were at Wells Fargo's 330 S. Hope Street, Los Angeles, CA, Regional Headquarters to protest the bank's obsession with sales goals that affect bank workers and consumers across the nation. Workers and their supporters attempted to meet with executives and delivered a petition to the bank with over 11,000 signatures calling for an end to sales goals that hurt workers and customers.

Activists in the coalition – which includes Make the Road New York; New York Communities for Change (NYCC); Minnesotans for Fair Economy; Missourians Organizing for Reform and Empowerment; Jobs with Justice; and local affiliates of CWA and UNI Global Union – are speaking out about the low pay, high pressure sales goals and unstable working conditions that lead to predatory practices.

"Since I started working at Wells Fargo two years ago, my blood pressure went up; I started suffering from insomnia and anxiety. I am only 27 years old, and yet the high-pressure sales goals are already taking a huge toll on my health and well-being. I am here today at Wells Fargo's LA HQ because employees are fed-up. We need reasonable sales goals. We want to be able to provide our customers with the services they need, not worry about being written up if we don't sell enough credit cards."

Wearing clip-on ties and holding signs that read "just because I wear a tie does not mean I can pay my mortgage" and "#BetterBanksToday", the workers complained about the dismal working conditions at major banks across the U.S. and demanded a fair share in the profits they create, as well as access to full-time and stable employment.

Bank workers and community members then marched to Bank of America where they proceeded to also take over the lobby. They delivered over four thousand petition signatures demanding the bank properly train workers to better serve customers. 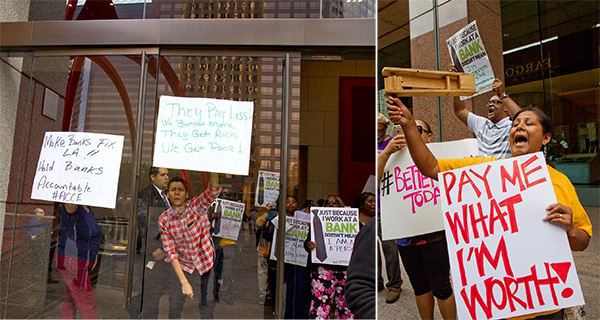 Bank workers, community members and other activists took over two banks to agitate for better working conditions and better banking for communities.