Tragedy visited our CWA family on August 11, when Piedmont passenger service agent Kendrick Darrell Hudson died on the job at Charlotte Douglas International airport. Kendrick, who was only 24 years old, was moving baggage at night on an airport vehicle that turned over on top of him when he hit a piece of luggage on the tarmac.

Family, friends, and coworkers held a vigil on August 18, which included memorable tributes to Kendrick. Kendrick's family received his vest and a jar overflowing with dozens of notes from agents who knew and loved him. Mainline agent (and former Piedmont agent) Asia Henley created the jar of memories. Piedmont, Mainline, and Envoy agents honored Kendrick and his family with a moment of silence across the country. Kendrick will be deeply missed by everyone who worked with him.

Micki Siegel de Hernandez, director of CWA's Occupational Safety and Health Program, is working closely with the leadership of Local 3645 and District 3 staff during the ongoing OSHA investigation of Kendrick’s death. Donielle Prophete, Vice President of Local 3645, is the on-site union representative who has been participating in the OSHA inspection. CWA wants to ensure that any factors that may have contributed to this tragedy, such as insufficient lighting at night on the tarmac, are corrected to prevent future injuries and to keep pursuing improved workplace safety for all agents. 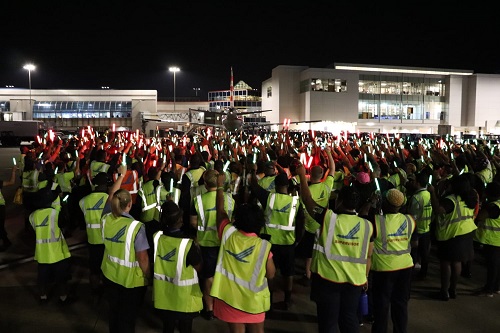