On a Zoom call this week, CWA kicked off the final phase of the CWA Votes 2020 program to get out the vote for pro-worker candidates. In addition to working hard to turn back Trump's anti-worker tide by electing Joe Biden, CWA members have been focusing their efforts on key Senate races to flip the Senate over the past year – a push that is particularly important as Mitch McConnell and Senate Republicans have shamelessly blocked crucial aid like the HEROES Act for working people during the pandemic. 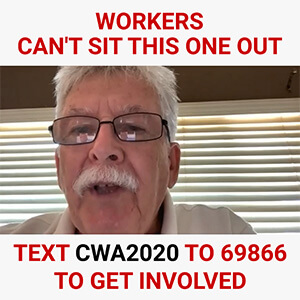 On the call, CWA President Chris Shelton, U.S. Senator Sherrod Brown, and CWA activists in key electoral states highlighted just how crucial the final push is towards repairing the damage that Trump and COVID-19 have done to our communities.

"The difference between succeeding in this election and failing could not be greater. We need to do every last thing that we can to win this election in the time between now and Election Day," said CWA President Chris Shelton.

"Donald Trump sold American workers a phony populism to make them feel like he was on their side, and he betrayed them," said Senator Sherrod Brown. "When you love this country, you fight for the people who make it work – that's what CWA workers do every day, and it's what we are all going to do between now and November."

"If we want real change next year and real progress for working people, we need to not only elect the top of the ticket – we need to flip the Senate," said Fernando Roman, Executive Vice President of CWA Local 7026 in Tucson. "Here in Arizona, CWA members are working hard to make sure we elect Mark Kelly in November so we can actually pass pro-worker legislation like the PRO Act, the Public Service Freedom to Negotiate Act, the HEROES Act, and other critical aid to help our nation recover from the pandemic.

"The Trump administration has been a disaster for working people. His union-busting NLRB has been dismantling workers' rights to organize, and he's completely abandoned us during the pandemic," said Meeca Miller-Brooks, a member of IUE-CWA Local 84758 from Dayton, Ohio. "The choice couldn't be more clear in November for union members. IUE-CWA members in Ohio and across the country will be working hard to elect Biden-Harris in November."

Check out highlights from the call at https://www.facebook.com/cwa.political/posts/3148218391962374 and visit CWAPolitical.org to find out how you can get involved.