CWA is urging the Federal Communications Commission (FCC) to reject the proposed merger between T-Mobile and Sprint, citing evidence that the merger will result in the loss of more than 28,000 jobs.

“As currently structured, the proposed T-Mobile and Sprint merger is against the public interest,” said CWA President Chris Shelton. “Unless the companies make a binding commitment not to eliminate jobs in their proposed merger, to stop violating federal labor laws, and to fully respect workers’ rights, the FCC should not approve this merger.” 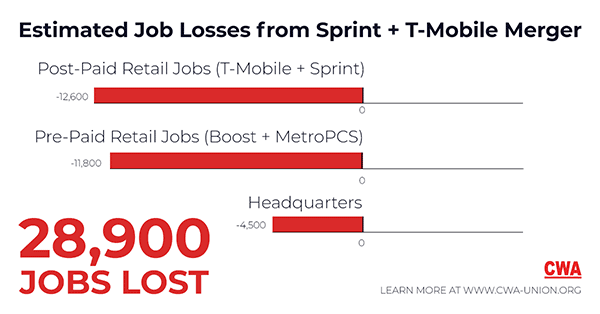 CWA’s comprehensive FCC filing outlines additional areas of concern with the proposed merger including the two companies' long history of labor and employment law violations; the loss of competition from the proposed horizontal merger; T-Mobile and Sprint’s failure to prove verifiable public interest benefits that will result from the merger; and serious national security concerns regarding possible integration of Chinese government-owned Huawei and ZTE equipment in their networks.

The FCC should not approve the merger without verifiable and enforceable commitments by T-Mobile and Sprint to ensure that no T-Mobile or Sprint employees will lose their jobs as a result of this transaction. The FCC must also ensure that the companies will commit to return all overseas customer call center jobs to the U.S., abide by all labor and employment laws, and maintain neutrality in allowing their employees to form a union of their own choosing, free from any employer interference.