The reports, released by CWA, the National Digital Inclusion Alliance, and the Economic Policy Institute, cover digital redlining, AT&T's use of subcontractors, and the effect of subcontracting and union-busting campaigns on wages for telecommunications workers.

CWA's report on AT&T's use of subcontractors includes data from a recent member survey which found that techs who interact regularly with work done by contractors consistently see problems, including quality problems that increase costs (96%), service quality problems for customers (81%), and safety risks for workers and the public (57%). During a briefing this week for Congressional staff and reporters, CWA members talked about their personal experience dealing with the aftermath of shoddy subcontractor work and how AT&T has left communities without access to next-generation fiber networks and eliminated good jobs.

"In the areas where AT&T has made fiber available, my coworkers and I have to clean up after the contractors that AT&T hires to do set-up work for us to connect fiber to a customer's home," said Charles Fuentes, a premises technician for AT&T in San Antonio and a member of CWA Local 6143. "Many jobs related to buried service wires end up as repeat jobs for us because subcontractors will not go deep enough into the soil, pull fiber lines too hard causing damage, or they lay parallel lines and end up taking customers out of service in the process. Additionally, these subcontractors routinely fail to inspect the integrity of the lines. These basic errors make it harder to provide service for customers in a timely fashion."

"With the pandemic, the simmering crisis of digital redlining has become a five-alarm emergency," said Stan Santos, a splicing technician for AT&T and a member of CWA Local 9408 in the Central Valley of California. "There is a huge swath of communities along the westside of Fresno County that lack basic infrastructure for broadband. The majority of these communities are ignored, the landlines left to die, as AT&T seeks to slough off these markets and cut the jobs of CWA members who carry out the deployment work and maintenance. In my view, AT&T is cutting jobs and abandoning rural communities in order to minimize capital expenditures and debt to improve its short term stock value."

"AT&T's failures show that if we want to ensure all households have access to broadband and that the buildout of that broadband creates good jobs, the only way that will happen is if Congress acts to make explicitly sure it happens," said CWA's Director of Government Affairs Dan Mauer. "That means that passing the Moving Forward Act, with its strong investment in broadband infrastructure and its accompanying worker protections, and passing the Protecting the Right to Organize Act to strengthen the National Labor Relations Act, must be at the top of Congress's agenda for 2021." 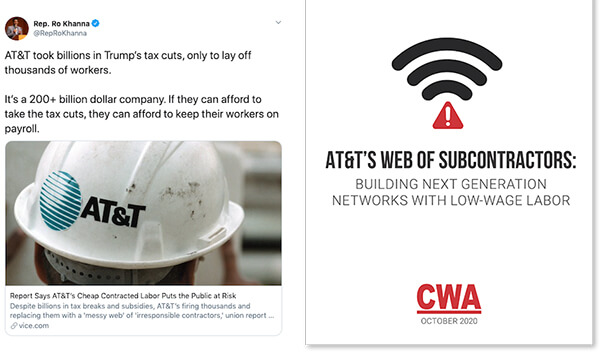