The bank workers, members of the Committee for Better Banks, testified that aggressive and predatory sales metrics hurt customers as well as employees.

"Eight years after our nation's financial meltdown, the big banks continue to mislead their customers," said former bank worker Oscar Garza. "I know because I was on the frontlines of this predatory practice. As a JP Morgan Chase personal banker in Dallas, my mandate was to sell, sell, sell. From the moment a customer entered the branch, my job was to find ways to upgrade an existing account to a bigger account -- one that often came with a higher monthly recurring charge. I'd refer them to financial analysts and convince customers to get new loans, whether they could afford it or not."

"At the San Diego branch where I work, we have to meet sales quotas every day -- or risk discipline or even losing our jobs," said Wells Fargo bank worker Khalid Taha. "On a daily basis, I'm expected to sell about 10 to 15 personal accounts, two to three new accounts, two to three credit cards and/or loans, and a daily referral to an insurance or mortgage. This kind of pressure means bank employees must prioritize selling products, rather than just focusing on what best matches people's needs. This is hurting our customers. I constantly have customers coming into my branch saying that they cannot afford the monthly maintenance fees for their checking accounts because they are on fixed incomes."

On the day of the briefing, the National Employment Law Project (NELP) released a detailed report on damaging bank practices based on interviews with about 75 bank workers.

Bank workers are demanding increased oversight and regulatory reform while enhancing full transparency on the products being pushed by banks. That's why they're joining the Committee for Better Banks, a coalition of bank workers, community and consumer advocacy groups, and labor organizations coming together to improve conditions in the bank industry. They work for just wages, career paths and job security for front-line bank workers. 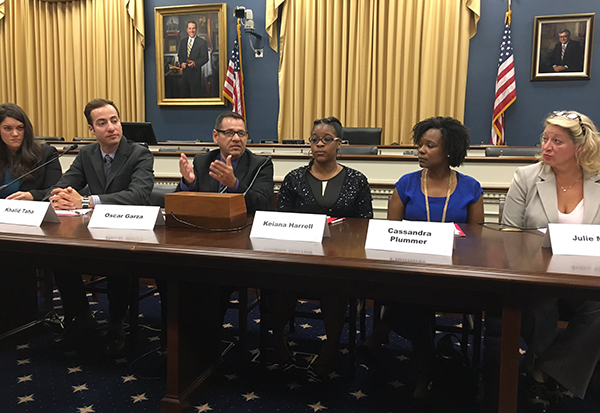