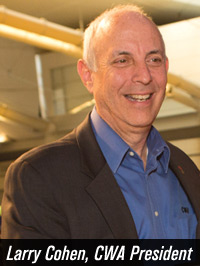 America needs a raise. Productivity, corporate profits, executive pay and the stock market keep going up, but working families only have seen their wages stagnate. There is no evidence of any economic recovery for most working women and men in the US.

The gap between the richest Americans and the rest of us is at another high point, back to where it was during the “gilded age” of the 1920s.

Following World War I, organized labor had to fight against “the American Plan,” which was nothing more than a strategy by the biggest employers and management groups to get rid of unions altogether. It almost succeeded. This corporate crusade against unions was helped enormously by several post- World War I judicial decisions by courts that were extremely hostile to workers and bargaining rights.

That changed with the New Deal and with passage of the National Labor Relations Act that established that promoting collective bargaining between workers and employers was the U.S. public policy.

As collective bargaining and union representation took off, working families realized real gains. From that point on, until the 1970s, working families experienced real income growth and negotiated real improvements in their jobs.

Today, the extreme opposition to collective bargaining In the U.S. has hit a new low.  The governor of South Carolina, Nikki Haley, actually said that companies with union represented workers weren’t welcome in the state. I’m sure our members in South Carolina and others who know that union representation usually brings higher pay and benefits and improved working conditions would disagree.

Just recently, we saw elected officials in Tennessee threaten workers and interfere in a union representation election at the Volkswagen plant in Chattanooga.

Usually, it’s management that makes threats, vows to shut down or harasses workers who want a union voice. In this case, Volkswagen management remained neutral, not surprisingly since every other VW plant in the world has collective bargaining.  Instead, there was unprecedented interference by U.S. Senator Corker, Governor Haslam and members of the state legislature. Workers were told by politicians that a vote for union representation meant Volkswagen wouldn’t expand production — an absolute lie! Volkswagen was threatened with the loss of financial support and tax incentives, a bizarre approach to the goal of keeping good jobs in the state.

If we are going to have any chance for economic recovery, working men and women need to be able to bargain collectively for improvements in wages and for our share of the productivity gains that our work has produced.

This issue of the CWA News looks at the growing wage gap and how the lack of bargaining rights, the increasing takeover by corporations of our elections and public policy and bad trade deals like the Trans Pacific Partnership are the contributing factors to a declining middle class standard of living for millions of Americans.

America Needs a Raise, not just a higher minimum wage. We know that alone, we can’t achieve our goals of bargaining rights, good wages and secure jobs, and health care and retirement security. But we also know that when we work with our partners and allies – greens, good government groups, civil rights and students’ organizations, and many more – we make a difference.

America Needs a Raise. It will take all of us working together to get it, not only at the bargaining table but in our communities.