Collective Bargaining Coverage is Lower Than Ever 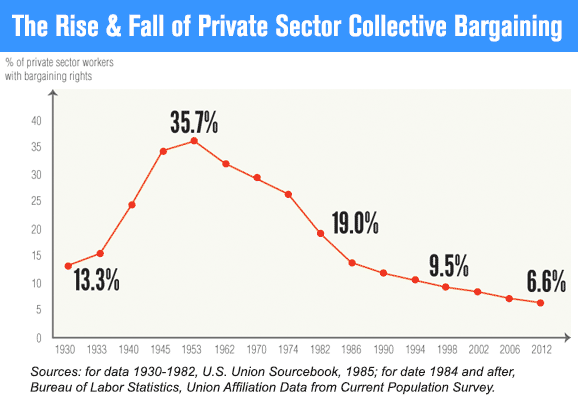 Workers in both established democracies and newer democracies in South America and Asia all have seen an increase in the percentage of workers with bargaining coverage.

But in the U.S., workers have seen a 70-year decline in collective bargaining continue.

Only through collective bargaining are workers able to gain their share of productivity in the form of higher wages and benefits. The result of that declining bargaining power has been stagnant real wages for working families, skyrocketing corporate earnings and after-tax profits and huge gains in pay for CEOs and overall incomes of the 1 percent. 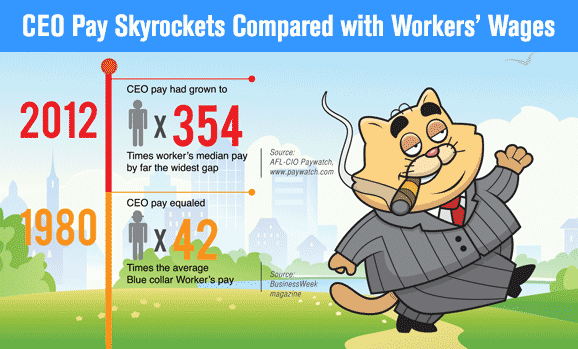 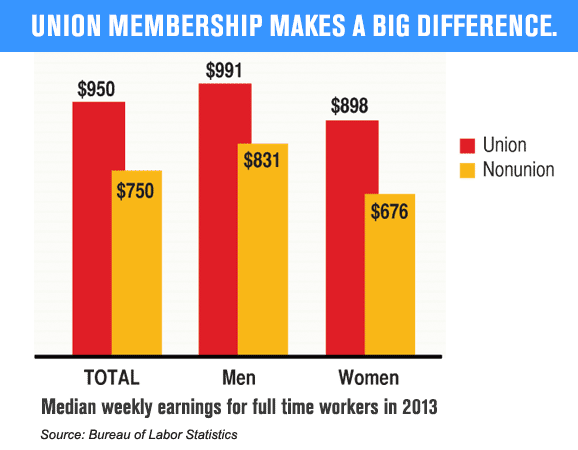 Corporate Control Over Our Democracy is Growing 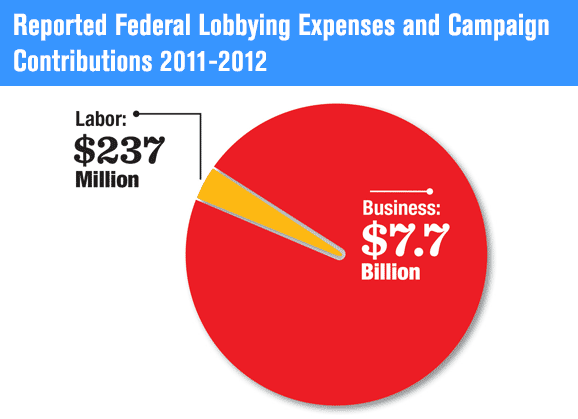 Corporations and the 1 percent are increasing their power and their control over our elections and democratic process.

The amount of spending in political campaigns by corporations, Super PACs and new “dark money” organizations is skyrocketing. According to the Center for Responsive Politics’ analysis of Super PACs and politically active nonprofits, these groups already have burned through more than three times their expenditures at the same point in the last election. “Dark money” organizations – nonprofits that aren’t required to disclose the names of their donors – are spending five times as much as two years ago.

The real issue is what these big spenders get in return and how this flood of dollars affects our public policy and the direction of our country.

The Supreme Court’s Citizens United ruling in 2010 that said corporations are people has allowed them to spend unlimited amounts of money on our elections. In campaign 2012, “independent” groups spent about $1 billion, much of it from anonymous individuals and corporations. The Supreme Court soon will issue a decision in the McCutcheon vs. the Federal Election Commission case, which could lift the cap on aggregate individual contributions from from $123,000 to $3.6 million.

When corporations and wealthy Americans bankroll political campaigns, there’s little hope that they’ll be made to pay their fair share of taxes or prevented from receiving a disproportionate share of tax breaks. If big money is allowed greater hold over our politics and policy, the current and long-term issues that matter to working Americans – good jobs, collective bargaining rights, heath care and retirement security – will be increasingly drowned out.

The Government By the People Act, introduced by Rep. John Sarbanes (D-Md.) with House Democratic Leader Nancy Pelosi, is a step forward to restore democracy in our federal elections. It encourages candidates to rely on a large number of small donations from constituents back home, as opposed to funds from extremely wealthy donors, special interests, Wall Street and big business. It would hold members of Congress accountable to the people who put them in office, not the biggest bankroll.

CWA activists in New York State, working with Citizen Action, Working Families and other allies, are pushing for passage of a state public financing law; the vote was close in last year’s legislative session. Iowa activists, working with Iowa Citizens for Community Improvement and other partners, have focused on public financing for municipality elections and on the state level.

A majority of Americans surveyed believe the government should work to reduce the income gap between rich and the poor, according to a new CNN poll.

These so-called “free trade” deals are a big part of our country’s growing income inequality problem.  Corporations flock to take advantage of lower wages overseas, then put pressure on the wages, benefits and working conditions of U.S. workers who are forced to compete with wage rates in countries like Vietnam, a TPP partner, where the average wage is 75 cents an hour and the minimum wage is 28 cents.

Even when a company returns tech or call center work to the U.S., workers are told that their competition is the Philippines, Bangladesh or other countries with no wage floor.

Trade deals like the TPP won’t lift up our standard of living. They only create a new race to the bottom. TPP also would bar the U.S. from implementing environmental and food safety standards, “Buy American” provisions, the “Press One for America” call center bill and green and sweatshop-free obligations. Foreign firms would have equal access to U.S. federal procurement contracts, meaning taxpayer dollars would be going to fund jobs abroad, not at home.

The TPP and fast track advocates talk a lot about exports, but they don’t mention the impact of the flood of imports that has resulted from trade deals like this, nor the transfer of jobs out of the U.S. In the 20 years of NAFTA and other trade deals, the U.S. trade deficit has skyrocketed to $1 trillion.

Trade policy needs to work for all. Otherwise it becomes a tool that benefits the wealthy at the expense of the rest of us. Read more about TPP at www.cwa-union.org/TPP.

What Can We Do About It?

By ourselves, we won’t make any progress on the issues that working families care about: good wages and secure jobs, health care, bargaining and organizing rights and retirement security.

But standing up with allies in the environmental movement, citizens groups like Common Cause, students, people of faith, the civil rights community and many more, we can make real change happen.

Our broad coalition broke the gridlock of the Senate obstruction last summer and again late in the year, when we pushed for changes that resulted in confirmations to the National Labor Relations Board, Environmental Protection Agency, Consumer Financial Protection Bureau, and the U.S. Court of Appeals for the D.C. Circuit.

We’ve joined forces with the NAACP to turn back an assault on voting rights, and we’re working with good government groups to restore our political process and end the flood of corporate money in our elections. 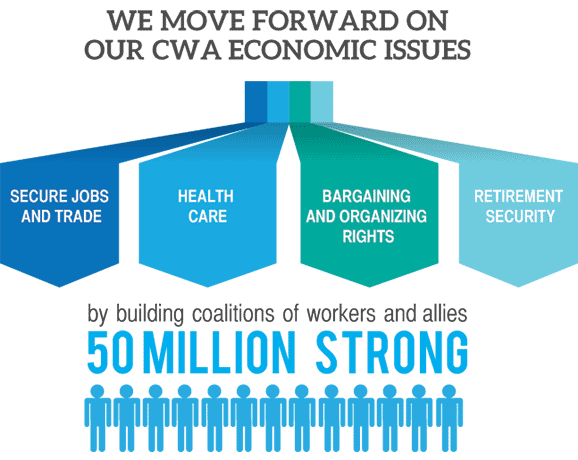 A HOW-TO FOR ACTIVISTS 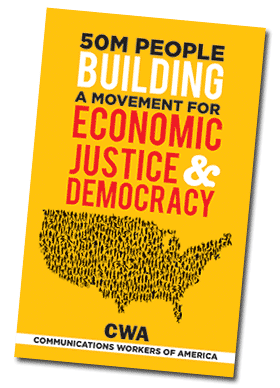 Want to learn more about how CWA activists are helping to build a movement for economic justice and democracy? Check out the latest version of our movement building booklet. Download it at www.cwa-union.org/economicjustice.

This booklet is filled with graphs and charts that make it clear that working families are losing ground, unless we join together with other membership organizations to fight back. Case studies spotlight our successful campaign to mobilize millions and save the NLRB, along with fights we still need to win, on bargaining rights and comprehensive immigration reform.

It also includes more stories to inspire activists. All the stories can be found at www.cwa-union.org/stories.