We Are CWA STRONG

CWA Local 7076 knew things had to change. The local was facing the same challenges hitting CWA locals and unions throughout the labor movement: how to fight back against anti-worker employers and lawmakers, how to continue to bargain good contracts in challenging times, and how to make sure workers' voices are heard.

In January 2016, CWA Local 7076 began an internal organizing program that made communication with members and non-members a top priority. Since then, more than 700 new members have joined the local. There are 29 more stewards and more than double the number of activists. 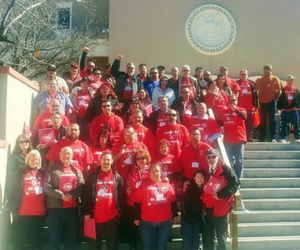 "Our members know we face big challenges, and that's why our local is working hard to grow stronger," said CWA Local 7076 President Donald Alire. "We are talking one-on-one with every employee in our workplaces, and making sure everyone knows how important it is to be united."

In addition to increasing its internal membership numbers, CWA Local 7076 has engaged members in every aspect of the local's work. The local says it's not ever seen so many new activists come forward in such a short period of time. And turnout for the local's 2017 Lobby Day, held at the New Mexico State Capitol to discuss CWA members' issues with state legislators, was nearly triple that of previous years.

"Hundreds of new members have joined our local in the last year. We have 29 new stewards who are being trained, a big increase. Our growing stewards and activists network will make sure our members stay engaged and mobilized," said Alire.

Internal organizing is now an ongoing part of the local's work to keep the union strong.

Branch Presidents and Shop Stewards are putting plans in place to strengthen the union by signing up new members in the workplace. Local 1031 represents public sector workers at State Colleges and Universities, and several municipal libraries across New Jersey.

CWA Local 6139 in Beaumont, Tex., has been focusing on internal organizing for the past five years. The local represents employees at AT&T Core, AT&T Mobility, and Helena Laboratories.

At the two AT&T Mobility stores represented by the local, workers are 95% organized with only two non-members. Local President Marc LaRousse's strategy at the Mobility stores includes pointing out to new employees key articles in the contract that make their work lives better than they would be in unorganized workplaces.

At Helena Labs, where 140 employees make and distribute medical supplies, the challenges are different. The turnover there is continual, so the local's best opportunity to sign up new members is at the new employee orientations occurring about once a month. Vice President Calvin Carter and District Steward Robert Millard talk with new employees for 15 minutes then ask them to join, and the vast majority say yes. This group has recently grown to 70% organized and now has six stewards.

LaRousse plays an important role, visiting both labs regularly, and talking with employees on their breaks. He says listening to them is the key to successful organizing.

Since the inception of the CWA STRONG campaign, a phenomenal change has taken place at CWA Local 3603 in Charlotte, NC. With Local President Bonnie Overman's support, the organizing committee has hit the ground running. 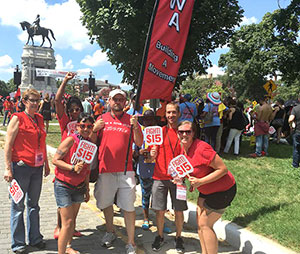 In March 2016, the Local had an overall percentage of 61.1% members signed up. Its organizing committee of six participated in a training on March 22. The training focused on having in-depth conversations with coworkers and asking for membership cards to be completed.

Organizing committee member Michael Roberts said, "Local 3603 has seen its membership increase tremendously. In my experience working to organize our union as part of CWA STRONG, if our members don't see us, we don't exist. With our increased site visits, our members are getting informed and educated and becoming CWA activists."

This Local now is 76.9% organized. They have made a commitment to keep organizing to become stronger than ever.

The local is growing and thriving despite anti-union attacks from the Republican-controlled state legislature. Last year, a West Virginia right to work (for less) law was passed, overriding the governor's veto. A circuit court judge issued a temporary injunction prohibiting the law from being enforced – for now.

With West Virginia workers' collective bargaining rights in jeopardy, Local 2009 is taking a proactive organizing approach as part of the CWA STRONG program.

As the local focuses on expanding its reach, Local President Shannon Fink says that face time is the key. "One-on-one, face-to-face contact between coworkers is how we grow. In order to organize effectively, we must have people in each workgroup reaching out to their coworkers individually to talk about what the union does to help them in the workplace and help the community."

Fink says that sharing information with prospective members about efforts like CWA's push to pass call center legislation shows that the union is actively working to help them.

The local is training 30 stewards, and is planning more mobilizing events.

CWA members aren't letting right to work (for less) laws get in their way of making their local CWA STRONG. These laws are intended to weaken workers' bargaining power by trying to restrict a local's resources.

Members of IUE-CWA Local 86004 in Arkansas City, Kan., work at GE Aviation Strother Field, where they manufacture airplane and helicopter engines. About 90 percent of the plant's 650 workers are CWA members, and of the 130 new hires, the membership rate is just about 100 percent.

President Jake Aguinaga said, "The entire Local Executive Board works on the floor every day and is visible and accessible to all the members." A very active local mobilization team can communicate quickly and effectively with the membership at a moment's notice. Using cell phones and text messaging, members are informed and engaged in everything the local
is doing.

Local member Josh Jacobs said that talking to new hires right away and letting them know about the power of being in the local union is key. "Another key to success is persistence – talking to all members about the union, even when you think they might not be interested."

In a challenging time for labor unions, Local 1180 is organizing to make a difference.

Local 1180 is one of the largest CWA public sector locals, representing more than 8,500 workers and 6,200 retirees. Most work in one of dozens of New York City agencies; others work at the Health and Hospitals Corporation, the Board of Education, the Housing Authority, the Transit Authority, the School Construction Authority, and the state's Unified Court System. Local 1180 also represent workers at private companies such as the Jacob Javits Convention Center; and at not-for-profit organizations including Planned Parenthood of New York City, the ASPCA, Human Rights First, and Human Rights Watch. 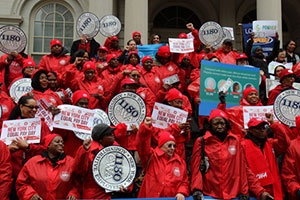 Over the past year, the local has adopted a community-based internal organizing strategy to not only sign up new members, but also help members get engaged and build a powerful grassroots network in their local communities. With this strategy in place, Local 1180 President Arthur Cheliotes says that the local has seen a big rise in members showing up to local borough meetings to make their voices heard.

"Our goal as a union is to make sure that we're an effective voice for workers in collective bargaining, as well as an organization that speaks for working people in our communities," said Cheliotes. "Our members – and not just stewards – are talking to their coworkers individually to make sure they know how the union is working to improve their lives, and to then get them actively involved in strengthening our efforts."

The work that the local has done has had concrete benefits for workers. This April, the local reached a favorable settlement in an EEOC case against the City of New York for pay discrimination, with the Federal Equal Employment Opportunity Commission ruling that the city needed to give raises to the workers and back pay and other damages totaling more than $246 million. The local also was able to get 40 out of 51 New York City Council members to support a bill to require gender wage data for the public sector and City contractors to be made available and transparent to the public.

"Our union is here to make sure that workers are being treated fairly in the workplace, and to improve the lives of our families and communities," said Cheliotes.

Already, the Republicans have passed a draconian bill, House File 291, to strip collective bargaining rights from public workers. In addition to banning workers from bargaining on anything other than base wages, the legislation requires unions to be recertified prior to every contract negotiation and institutes other extreme provisions to take away workers' rights. In addition to the new anti-union laws, Iowa is a right to work (for less) state.

Despite these challenges, Local 7103 President Corey Davis says that the CWA STRONG program is helping the local grow and flourish.

"The challenges we face here in Iowa have awoken a sleeping giant," said Davis. "Our members know that if they don't stand up and fight back now, they won’t have anything left to fight for. Members are standing together and organizing to fight for the people we represent – and we're just getting started."

Recently, with assistance from Local 7103 membersfrom AT&T, CenturyLink, and DIRECTV, the local signed up 54 new members in two hours at Council Bluffs Schools. The local has more than tripled its membership there.

Davis says that the key to the local's success is reaching out to people individually. "We can send out emails or letters, but one-on-one, face-to-face contact is really what gets the results." In addition to recruiting new members, the local is actively recruiting new stewards and activists from all of its different work groups and holding organizing trainings in September.

The local was also honored with an award at this year's CWA convention for signing up 100 workers in either one or both of the past two years, an especially impressive feat for a local of its size.